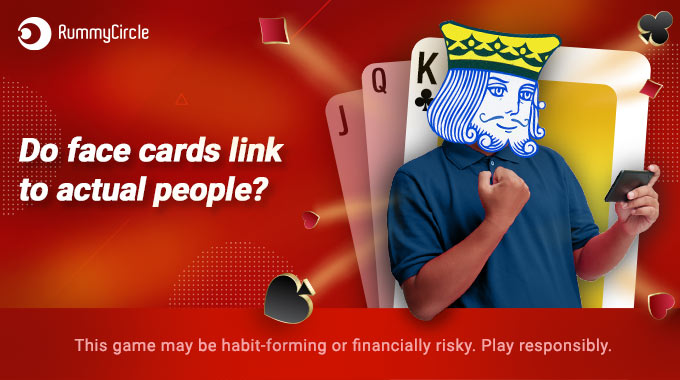 If you’ve ever sat down to play Rummy, looked at the face cards and wondered whether those figures were meant to be real-life people or perhaps historical figures – you’re not alone. Perhaps it was the stern expression on the King’s face or the graceful smile of the Queen, or if you’ve got a keen enough eye and an interest in history, the Tudor ruff collar that set this thought off. Nevertheless, ponderings of this nature aren’t uncommon and are perhaps not unfounded either.

For those who are unfamiliar with the terminology, face cards (also called royalty cards or court cards) are the Jack, King and Queen cards. They are called face cards because unlike the number cards (Ace, two, three up to ten), these cards have faces or pictures of a royal person in contrast to number cards which just have the number and pips or symbols of each suit of cards. There are 12 face cards in each deck of 52 playing cards, due to the 4 suites: Hearts, Clubs, Spades and Diamonds. Many have speculated that these pictures are intended to be specific royal personages.

However, this is not usually the case – designs were supposed to reflect garments, accessories and fashion trends that could be seen in European royal courts. These included mantles, surcoats, robes and gable hoods. These were worn commonly by nobles and royals and were even considered the staple at the time for the wealthy and powerful. They were not meant to reflect on any particular individual.

However, as with all artwork, it changes due to the whims of the designers and the manufacturers of the cards, sometimes also influenced by the location where the cards were produced or meant to be sold. Sometimes real kings and queens, and even knights, who were the inspiration for Jacks rather than princes as many assumed, were depicted in the face cards, but this was more the exception rather than the rule. Pictured face cards only came to Europe in the 15th century, at which point playing cards had already been popular for centuries. So it’s not accurate to say that face cards were inked with royalty in mind.

That being said, there were trends in the 16th century where king cards would often portray famous leaders of great empires such as Julius Caesar, Alexander the Great, Charlemagne, King of the Franks and David, the third king of Israel and Judah from the Hebrew Bible. Caesar represented the Roman Empire, while Alexander the Great represented the Macedonian Empire. Similarly, Charlemagne or Charles the Great was the first Holy Roman Emperor and founded the Carolingian Empire while David was a biblical figure. Queen cards had Athena and Rachel, wife of Jacob, from the Bible among other female figures of renown. Some Spanish and German decks famously abstained from using queenly representation at all, instead using a separate set of all male figures.

The trend of picturing actual royalty was much later, after playing cards had been circulating and in use for quite a while already. So, no, generally face cards do not link to actual people. But in special cases such as customized or uniquely designed decks, you can find the Greats of previous eras emblazoned on your face cards.

Playing cards have a surprisingly long and intriguing history that draws in many people. Most end up at this point while playing their favorite card games: poker, bridge, solitaire. But the Rummy game is (definitely) the most popular and long-standing of its peers. Especially with the rise of Rummy online, where people can play multiple variants of the game on different tables at the same time, or keep it singular and hone their skills, and win amazing prizes on the way. Rummy Circle is the best rummy app to do this, with an exciting range of variants to try out on the multi-table and a great prize pool that could incentivize the most reluctant of players. Stir the precious nostalgia of playing rummy late into the night, or make new memories playing online rummy free with Rummy Circle!