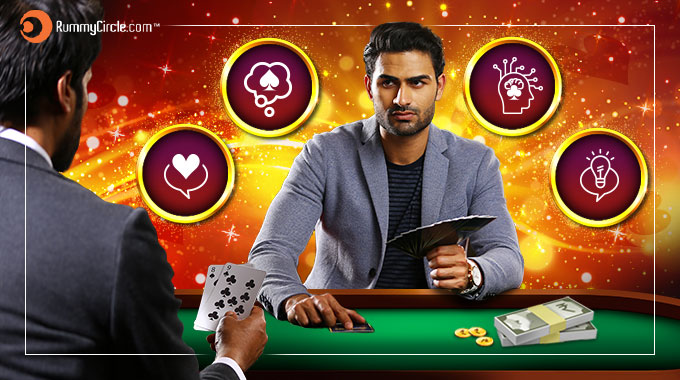 Strategy for Beginners: Get Into Your Opponents’ Mind

On the road to becoming a good rummy player, this is an interesting strategy to learn. One of the most important differences between the rummy playing abilities of a fresher and an experienced person is the keen art of observation. A novice focuses on their own cards, but a skilled player focuses on their opponent’s moves as well.

How to get into the mind of the competitor?

Keep a close track of cards your opponent picks or discards from the Open deck or Hand so that you know which cards are to be hoarded and what to discard. Cards close to the ones being discarded or kept are the ones.

It is a brilliant way to play the game and is particularly popular during cash tournaments that involve high stakes. This helps the player construe the cards their opponent is holding. Learning and observing how other players at the table are playing their game offers most experienced players a winning edge. As a beginner, you can start practicing this strategy by playing rummy online without cash and then move up to cash rummy contest to ace the skill. Let us lay out this strategy with examples to understand it completely.

Example of this strategy: In this hypothetical situation, there are two players that are playing pool rummy. The wildcard joker is 10 and its suits.

Player 1 has formed pure and impure sequences, and a set. However, there are four cards that do not fit in the combinations.

Player 2 has formed two pure sequences and has two likely sets. There are three cards that are unwanted.

This gives you an idea that he is not forming a sequence with 5♠ or a set.

Note: Since, player 2 picked the card from the closed deck, player 1 cannot guess the gameplay.

He is left with one unwanted card – K♣. The game is getting interesting. Player 1 needs just one card to win – Q♠ or a joker.

This round could be a game changer.

It was a close game, but player 2 read the mind of player 1. This bought him time and edge over the game, which eventually paid off.

Getting into the mind of the fellow player, gives you an idea of the sequences or sets he is forming. It is a skill worth learning in the free, unlimited practice games. It is a skill that needs a lot of practice, but it has its perks.