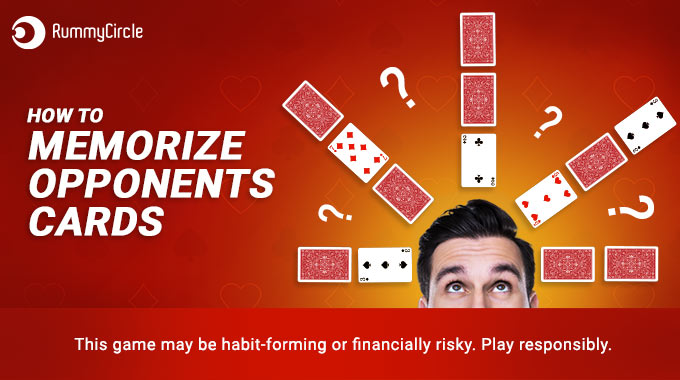 How To Memorize Opponents Cards in Indian Rummy

Rummy is a game of strategy and skill. The advent of digital technology and the internet has led to the advent of online gaming, and card games are a popular pastime for many in India. Rummy is a crowd favourite, with millions logging in to play the free rummy gaming apps that have proliferated.

Rummy is a game of skill, and any beginner needs to know the rules and get in some practice before getting on to the apps to play on a table. The online rummy apps have practice games for such newbies. Another critical ingredient to being a good rummy player is to have card memory. A few people have photographic memories, and some others work hard to develop the skill. We mean to say that playing rummy online is not all fun and games only. It requires good memory, some mathematical skills, and the ability to strategize, and have a game plan.

Here we will talk about how good memory can help you win at rummy. Players will be in dire straits if they do not remember whether a particular card has been played. They can either hold on to a sequence without completing it or discard a necessary card, thinking that it no longer can be used in a sequence. There is no exact system for remembering the cards. What works is simply training, by constant practice.

There are a few tricks and tips that veterans share about memorizing cards and accurately guessing their opponents’ hands. Let us scrutinize some here.

When you sit down for an online rummy game, try to visualize the 52 cards in the deck and then disregard the 13 you hold in your hand. As the game progresses and you and your opponents discard cards, try to eliminate these cards from your mental deck.

Another trick that works is compartmentalizing the discard and the pickup moves. Mentally visualizing those cards face in two literal compartments or boxes helps. It also enables you to formulate what your opponents might be holding.

Once the game progresses and almost a third of the cards have been played, the separation of discards and pickups becomes easier. Also, one can form a relatively accurate picture of the cards in play and even guess what the opponents hold and what they need or do not need.

Keep tabs on Pickups and Discards

Most important is to remember the cards you discard and the ones your opponents are picking up from the discarded pile. Keep reviewing in your mind the cards that your adversaries pick up. It should not be too difficult as they were a part of your hand. Alongside keep tabs on what your opponents are discarding.

Once you sort out the pickups in your mind, you can calculate your opponents’ cards correctly. While reading this, you might feel confused and think it is impossible to keep tabs on so many cards, but it becomes easier as you play along and practice. As your skill level progresses, you will develop a system of your own to recollect what your opponents discard or pick.

Sometimes you need to change course midway and reorganize your hand based on the earlier discards. If you do not remember then you might not win the game.

Another trick that is constantly offered for memorizing cards in rummy is that of visualizing a palace with rooms. Assign one room to each card and keep on adding or misusing mentally. Different people have different ways of assigning cards to their palaces. They form mental sequences or keep it simple and keep all the sets in 13 separate rooms.

Some form a mental grid with the different four suits on the y-axis and the cards on the x-axis.

However, remember not to overdo the memory game. There is something called mental fatigue and playing for long and too many games can lead to confusion in the mind. So, an important lesson is the ability to forget a hand once it is completed.