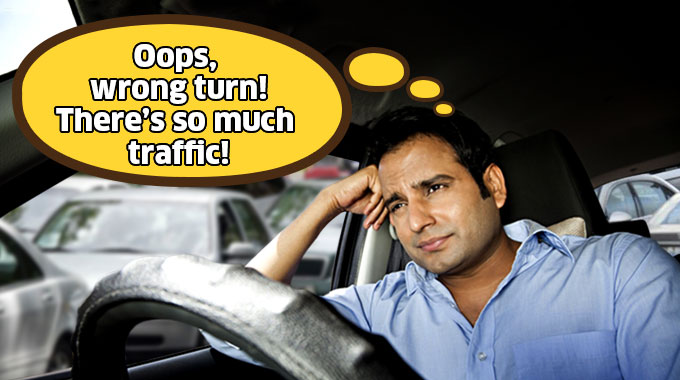 And it’s all messed up!

Things were going absolutely fine, you were just about to get that pat on the back and then one slip and it’s all messed up. This happens to the best of us. Sometimes it is quite frustrating but on a lighter note, it can be hilarious as well. Here are some instances that we found tickling our funny bones.

Come marriage season, and you can see one wedding at every turn. Incidentally, none of the marriage receptions start at the correct time. When you enter a marriage hall and find virtually everyone but the couple, you might as well decide to take a stroll outside. By the time you come back, seeing a long queue waiting to grace the couple on the dais, you might feel like dining first. After half an hour although you might be relieved to see a very few left in the queue you will only be shocked to know that you have entered a wrong wedding hall. Well, the dinner was good, and you still have the gift, so head right away…

The embarrassing wrong show moment is very common while playing online Rummy. Rummy is a game which demands a stern focus not only on the status of your own cards but also it requires you to watch your opponents’ moves like a hawk. The objective of Rummy is to form at least two sequences one of which must be a pure life and the rest of the cards can be arranged to form sequences and sets. When you keep watching your opponents’ game seeing him picking up cards confidently, you may tend to believe that he is going to form the Rummy any time soon and so on getting a favorable card, you may urgently go for a declaration even without forming the pure sequence. Such a wrong declaration is called the wrong show in Rummy which eliminates you from the deal. Therefore, in order to play Rummy online real money and succeed, a little bit of patience is required alongside more skill and intelligence.

When a proficient trekker likes to climb a steep mountain, it can be called an adventure. But when the same person tries to take a selfie standing on the edge of the hill, it may result in mayhem. When a person is on a safari traveling in an open jeep, it can be called adventurous. But when the same person tries to get down and take a selfie with a wild beast, it can turn out to be a misadventure. You may still get away with those selfies. What if a girl happens to pass and as you are taking a selfie faces the camera? You may have some serious explaining to do to your wife when you post the same on social media. Why take such a risk? Selfies, in general, are avoidable, as they can easily catch you on the wrong foot.

Nowadays, almost every one of the mobile users use chat apps like Whatsapp, Facebook messengers, etc., What’s more, they get themselves inducted in various groups like family, friends, schools, colleges and so many. Thus, these groups turn into a comfortable platform of gossip mongers. When energetically on a chat spree with many, you may inadvertently make a slanderous remark about one of your friends to another person which might end up in the former’s window itself. This embarrassment will remain an indelible scar for the rest of your life.

Sometimes no one can predict what life throws out. You might be going for an interview riding a two-wheeler. Misfortune meets you in the form of heaviest traffic jam possible. So, you might end up taking a wrong turn to evade the traffic. Misfortunes never come single, isn’t it? Wherever you are driving, you may be seeing “take diversion” board welcoming you which is a common sight anywhere in India nowadays. With no other option in hand, you may have to leave it for the destiny to decide your fate. Then finally you may end up reaching a location where there is no sight of any human being at all. You may be all alone. But hey what do you get? A peaceful ambiance comprising of crystal-clear lakes, the sound of squirrels, cuckoos, lush greeneries, looking like a thicket full of trees and much more. The serene atmosphere may bright out a poet in you after all!!

The beginning is important, but so is the end. Haste can lead to waste and we have all seen it. So, take a deep breath and look at where you are and what you are doing, one last time.

Life itself is like a Rummy game. Play with focus and make appropriate moves so that no wrong shows crop up.