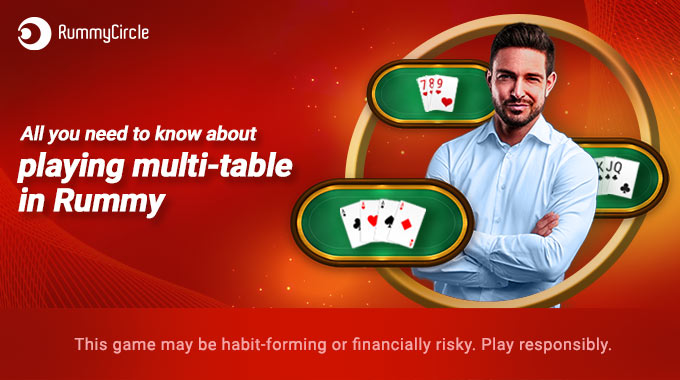 All you need to know about playing multi-table in Rummy

What is playing multi-table or multi-tabling, exactly? It is when a person plays on more than one rummy table against different players at once. This can be a difficult trick to pull off, however, because there are so many elements in play that things can get chaotic: between managing your cards, gauging your opponents and organizing your strategy, it can be very hectic. So, here’s what you need to know about playing multi-table in Rummy.

Have the basics down-pat before you move onto multiple tables. Some players make the mistake of biting off more than they can chew by trying multi-tables with more than they can handle. Predictably, they end up stressed, overworked and left with an overall sour memory of the experience. Start with two, and once you’re satisfied and confident, step up your game. You can move up the number slowly, making sure you’re comfortable in your handling before adding another table, thus guaranteeing a cool head to strategize and win your game. There’s no need to start at 100 at the very beginning.

A consistent playing style is key. Having one or a few strategies in your pocket that you’re well-practiced in can win you the game. These strategies are those that you are well-versed in, the ones you know like the back of your hand and are confident in. They are tried, tested and true, so you can depend on them. This is a helpful factor during the smorgasbord of elements thrown at you during multi-table. Trying out new things while playing multi-table will only add to the stress.

It’s important to practice as you start out with multi-tabling. This is a whole new level of gaming, and sometimes a different outcome is part of it. So players must keep practicing, observing and learning as they play to get a proper grip on this new playing style. RummyCircle offers players practice tournaments in which there is no cash prize, but players can hone their online rummy skills in a real-time competitive environment. Generally, practice tournaments are designed to improve your rummy skills and get familiar with the website when you first play. But using it for your own purposes will work just as well, and will prepare you for multi-tabling.

Stick to one variant while playing – having a different variant on each table will just confuse and fluster you. As previously stated, there are many different variants, so there is definitely a heavy temptation to try your hand at juggling multiple variants on each of the tables – however, this is not suggested. In fact, this will more than likely mess up all your games as you may get turned around with the different rules and objectives for each game. Hence, it is advised that you try out the variants, feel them out, and then pick the one that works best for you and for your playing style. Something that feels intuitive to you and meshes well with your strategies is your best option. Keep it simple and enjoy your rummy game.