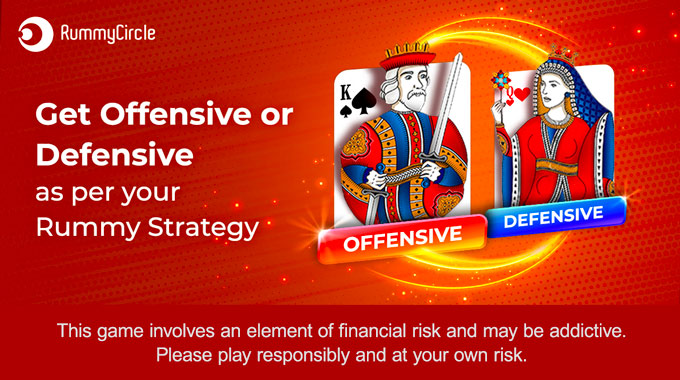 Get offensive or defensive as per your Rummy Strategy

In India, Rummy is primarily seen as a social game, played at family dos or amongst friends. Still, with the advent of digital technology and numerous online Rummy apps, card games have become a way to pass the time, relax, have some downtime, and test gaming skills.

For beginners, there are practice games. For the experts, there are tournaments and running competitive tables to test skills and win rewards.

Generally, in classic Rummy strategy games, there are some moves that people with some skills adopt.

Beginners do not have any game plan or strategy in place. They are there to win and have some fun. Only after one reaches a certain skill level, there is a comprehension of strategy, game plan, methodology, memory play, etc. Only after playing several games on the rummy applications will a player understand the nuances of the game and gain proficiency with techniques.

The ultimate objective for all rummy players is to declare first. And to reach this objective, players need to learn certain tricks and skills.

In any game, there are two types of  players broadly–offensive or defensive. Some people are conservative and others are more aggressive in approach.

What’s an offensive approach in rummy?

An offensive approach means that players are ready to play with all guns blazing. He or she is not ready to wait and watch and see where the game goes.

A forceful player is proactive and creates moves. An offensive player does not play safe and hold on to certain cards hoping that they will be helpful later. Most aggressive players are seasoned gamers and have long experience. They pre-empt and can read and predict the game of their opponents with an uncanny accuracy rate.

They have good strategy skills and memory. They are focused and are able to keep tabs on what is picked and discarded.

They are also ambitious and good at bluffing and feigning. ‘Offensive’ players are ready to break up a sequence if they want to mislead the opponent.

Most such players have quick reflexes and good perceptive powers.

A cautious note for all offensive players. One needs to vary their game a little and not become predictable. A more experienced player might use these offensive tactics to his advantage. It is always tricky when your opponent can read your moves.

What is a cautious or defensive approach?

A cautious or defensive player lets the opposition determine the rhythm of the game. They take cues from the rival players. Defensive players are reactive nor proactive generally.

This kind of play may be slow and steady, but the slow and steady do win the race as the adage goes. In the defensive play, gamers have an opportunity to adjust their moves and counteract what the other player is trying to do.

Most rummy players adopt the defensive approach. They let the opposition determine the course and speed of the game. When playing online rummy, in particular players that take the defensive approach adapt to the playing style of their opponents and with a better strategy that can prevent errors in judgment.

Defense is something that saves the game for you at most times. If you have a bad set of cards, then that one offensive move at the start might just push you into the winning stakes. Hence, making the first move sometimes saves you from allowing your opponent to steer you around.

A defensive play is advisable when one gets terrible cards.

Which Rummy Strategy should a player take on?

My advice is to go in for a blend of both. People are inherently laid back or extroverts, and that may reflect in their playing. But online rummy is about strategies and skills. One can develop either one or use both judiciously as the occasion demands.

Do not stick to being overly aggressive or overly retiring or defensive in your play. Play according to the cards in hand and respond to your opponents’ play. And lastly, practice and go by your intuitions too.