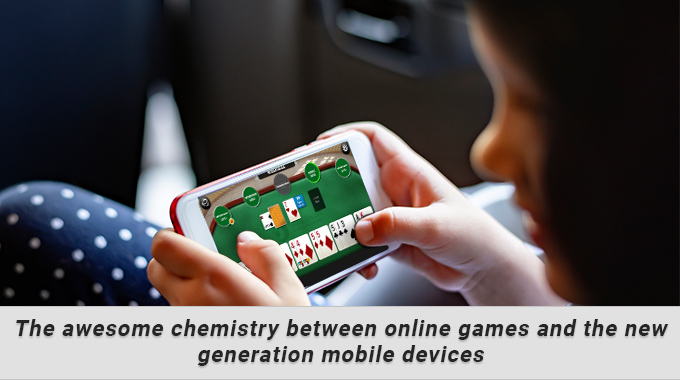 If someone had told you, a couple of decades ago, that a device the size of a wallet would be able to process information faster and more efficiently than any computer, it would certainly draw a lot of laughs. But truth being stranger than fiction, this is now a reality thanks to the introduction of new generation mobile phones. And one of the biggest beneficiaries of the new and powerful mobile devices is none other than online games.

Online games, such rummy games, have come a long way from their earlier avatars and now are easily accessible to all people with smartphones and an internet connection. Not only that there are a variety of ways by which there is a symbiosis between online gaming and mobile devices. Some of the best are:

1. Ease of access – Mobiles have made the accessibility of all games traditionally played face to face. Mobile internet connections are getting faster, stronger and cheaper as well. Thus, this trend will keep continuing and with increasing internet access and mobile phone accessibility, the online gaming trend will only be looking forward.

2. Better interfaces – This one is easy to notice if an individual tracks the development of user interfaces for online gaming, specifically for mobile platforms, over the past decade. From barely being functional to today’s interfaces which seem to have the ability to transport players into a fantasy world created for them, interfaces sure have come a long way. One of the best things to come out of the extensive development of interfaces is that games that were traditionally played offline are not being brought into the virtual world. More importantly, these interfaces also ensure the ideal ambience, environment and resources to play such games. Card games, in particular, benefit most from this. This is because games like rummy can be quite intensive to learn and play, and a good interface aids that process.

3. Cash reliability – Many online games also include a cash component which makes them even more alluring for players. One of them is discrete payments to push forward the game as winnings and money are now inexorably linked with online gaming. Better mobile phones make transfers near instantaneous. More than that, the security provided for online transactions today is far better it has ever been. This aids in building user confidence while also having the effect of further monetising games, thereby pushing for them to be made even more ‘real’, making it more likely that users will pay for the experience.

4. Even offline, you are online – Most mobile games come in their own apps which are tailor-made for the games. The settings on these apps have matured tremendously so that today, even when an individual is not playing a game, it has various notifications set up to alert the player about what’s happening. Have you ever received notifications from an app even though you were offline? This is why! If a friend or fellow-gamer is online and ready to play, or if a new scheme has been launched, you will get a notification for all these events. This feature ensures that the game does not leave the purview of the player at all.

5. The good kind of competition – With the increasing progress of mobile technology and the internet, online gaming has to constantly reinvent itself if it wants to stay ahead of the curve. Far too often online gaming platforms that choose not to progress are supplanted by newer and better sites which understand new technology and its advantages. Thus, whichever gaming sites exist online today, do a good job of keeping themselves abreast with the latest upgrades in mobile technologies. This is especially great for players as it ensures they always have updated platforms on which they can pursue their gaming interests.

6. No more cheating – One area where online games and new mobile devices have truly found fruition has to be the way in which all in-game illegalities, along with the occasional cheating have been eradicated from the gaming experience. Gone are the days when an individual with a bit of coding knowledge could infiltrate a game’s makeup and cheat. Additionally, as opposed to playing a game in a traditional setting, in a virtual setting, there is no way for players to cheat and turn things in their favour. This is arguably one of the best uses of online gaming in general.

Conclusion
With mobile internet now speeding towards a 5G area, as well as making innovations in a mobile’s processing power, the partnership between online games and mobiles is going to be a very long and fruitful one. Games like online rummy have really hit it off due to this relationship and even those who have little knowledge of rummy can join in the fun. They need only to look up certain rummy rules or watch tutorial videos and play a few practice games, to start their journey of the rummy experience.