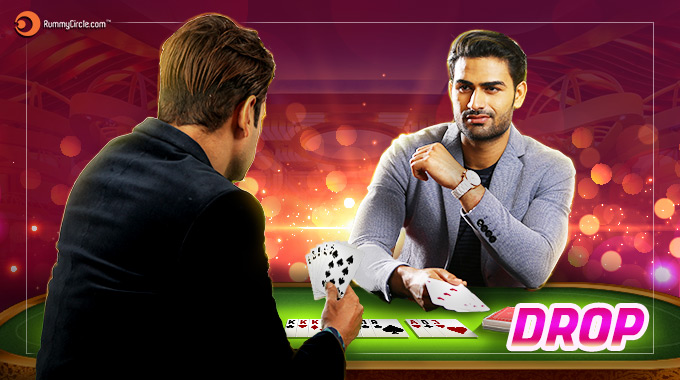 Strategy for Beginners : The Right Time To Drop From A Rummy Game

There are occasions where it is difficult to group cards into viable sequences and sets. The cards you have received are bad, then what do you do? There is the option to drop from the game. When you want to leave the rummy table at the start or middle of the game, it is called a drop.

Dropping is used as a strategy when you feel losing the deal gracefully is better than a tough fight till the end resulting in a defeat. Your priority as a rummy player should be forming a pure sequence and another sequence with or without a joker card. If you find numerous unmatched cards and cannot find a joker card, it is always better to drop the game. So, it is a better strategy to drop the game as soon as possible and carry fewer points instead of burdening yourselves with huge points. For instance, if you are losing and your score is 75, consider a drop of 20 or 40 points. It is a better option if you are playing a cash game. It is wiser to use that money for a better hand.

There are three types of drop:

First drop: When you leave the game at the initial stage, on very first turn, then it is known as first drop. It will cost you 20 points. The best time to use this strategy is when you do not have jokers and you have a lot of unmatched cards.

Middle drop: When you decide to leave the table on a turn other than the first, it is called middle drop. It will cost you 40 points. The best time to use this strategy is where there are no jokers, but there is a possibility of grouping cards. However, after few rounds the possibility thins out, then it is advisable to drop.

Note 1: If you miss three consecutive rounds, then you are automatically dropped from the game. It will amount to a loss of 40 points.

Note 2: If the player hasn’t picked any card, it is taken as the first drop.

Note 3: If a player leaves the table after picking from the closed deck, it is considered middle drop.

Scenarios to use drop:

Scenario 1: If you have a lot of high-value cards such as King, Queen, Ace without strong in between cards, then drop from the table. It will secure you 20 points. These high-value cards increase the point load. For instance, 8♠7♥6♥8♣Q♦5♦K♣K♦J♦Q♠4♣8♥4♠

Scenario 3: If you are playing a cash rummy game, the best thing to do is to keep your loss to a minimum and drop out of the game at the start in a difficult game.

When not to drop from a game:

A drop can also prove to be unnecessary in some situations. If your hand has a wildcard and printed jokers, the possibility of you winning the game is good. Even if you have a wildcard but no joker, you still have an opportunity to win after a few moves. In such situations, don’t drop the hand unless you are sure you cannot group your cards into a good combination of sets and sequences. If you think you can make one pure sequence and one impure sequence with/without a joker, you should not drop it. However, if this possibility seems unlikely, it’s much better to drop than lose a lot.

There are four rummy variants on this platform and the drop option varies for a couple of them. Let us find out what the differences are for each of them.

Drop is a useful option, but it should be used wisely. When you drop from the game has a direct impact to your score.  Weigh your options before putting in the towel.