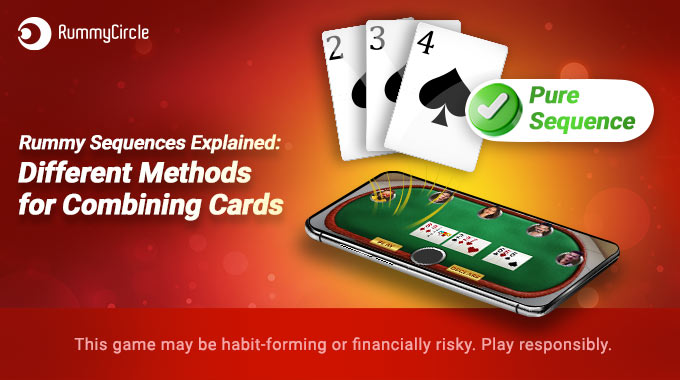 Rummy is a popular card game for its entertainment and fun value. Along with the fun element, one can even hone and test strategy skills.

There are many versions of Rummy, but in India, it is the 13-card game that is most popular. The 13 Card Rummy is also commonly known as Indian Rummy and Paplu.

The basic premise of the game is to form sets and sequences, and the winner is decided based on speed, accuracy and points. The rules regarding the number of playing cards in hand and what sequences to form vary according to the type of rummy one is playing.

An important ingredient of winning at Rummy is knowing the combinations of sequences one can form in the game. With online gaming now a part of digital existence, millions of people have turned to similar online card-playing platforms to get their dose of entertainment and fun. Online Rummy is as popular now as its offline version.

For the rookies, Rummy sequences are a set of three or more cards that are put together in a specific order. One can form pure and impure sequences and sets. The impure ones include jokers as substitutes for the missing card. The point is to create melding sets and sequences to minimize points and declare first. Completing a pure sequence along with an impure one or sets improves a player’s possibilities of winning.

Some of the possible combinations of sequences for a declaration in a 13-card game that one can form are:

One needs to have at least one pure sequence and a minimum of two sequences; otherwise, points up to 80 are added.

high point cards include cards from 6 to 10 for any of the signs. Picture and Aces are also considered high point cards by some, but for convenience, we have put them in a different category here.

Picture card sequences can include J, Q and K. These cards are assigned 10 points each in the game.

This is done by combining picture and number cards in ascending or descending order. For example, one can make a sequence of 8,9, 10, J, Q. It is viable only if it is of the same color suit.

A joker is usually used to replace the card that is missing in the sequence. But remember, a pure sequence is necessary for a valid declaration. A sequence with a joker is not considered pure.

This is possible when three sets of cards are used in a game. A natural sequence can be formed of the same value card of the same suit. For example, three 9s of ace can be put together and can be counted as a pure sequence.

There can be invalid sets if one does not have three or more cards of the same rank. A combination of four 5s with two of the same set is invalid. A 5 of diamond, a 5 of hearts and two 5s of spades is an invalid set.

A player needs constant practice to master the game of Rummy. RummyCircle offers practice games for the discerning to first test the waters and learn the game.

Many rules, regulations and strategies can be learned during these sessions. To play Rummy, just do a rummy game download, register and get started. Fast gameplay, secure platform and safe transactions, and international gameplay standards make Rummy Circle amongst India’s most popular gaming websites.