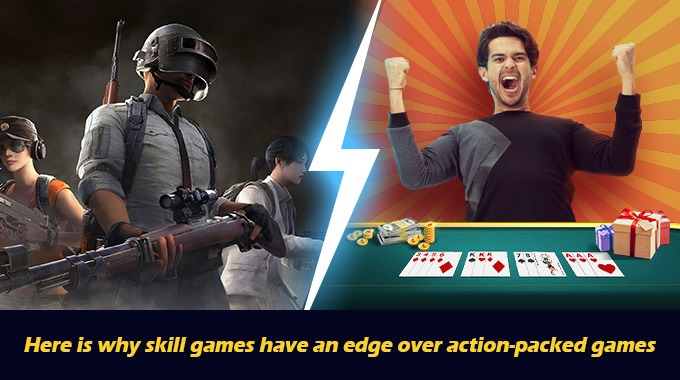 The online gaming market is brimming with opportunities, with games available in every category to choose from. From action-packed games like racing games, PUBG and other RPG, to skill-based games such as chess, sudoku and rummy, there is a game for everyone!

Action games dominated the market for a long time. Young adults and children loved to indulge in effortless entertainment and compete in racing games, first-person shooter (FPS) games, etc. Following this, the next generation role-playing games (RPG) like Tomb Raider also had kids glued to computers. However, with an expansion in the demographics of online gaming, there has also been a shift in the interest towards certain types of games.

With the evolution of card games venturing into the online domain, both the young and old gained the opportunity to play these games. The advent of smartphones and the development of online skill-based game apps saw the emergence of a new breed of people who were keener on playing chess, sudoku and rummy card game over action games. While the youngsters moved away from various indoor and outdoor games and started playing action-packed games, elders fancied playing chess, sudoku and rummy.

However, both kinds of games have their fair share of takers. Children and young adults enjoy the thrill, action, speed and the thought of decimating opponents by outwitting and outdoing them. While, adults prefer the idea of outpacing opponents through skill, knowledge, and cognitive skills. The departure between the two types is apparent with each having its charms.

Online Gamers And The Challenges They Face

An average online gamer is under 24 years and is engaged in gaming because it offers relief from stress and provides opportunities for social interaction. Many of these gamers claimed that high data consumption is one of the challenges they face in online gaming. The main culprit is action-based, as they include lots of graphics that consume high amounts of data and slow down the phone. Contrary to this, skill-based games require less time to load while still maintaining a clean interface.

It is found that people who play action-packed games do better at tasks that involve vision and perception. Such games improve a person’s sense of coordination and engage their senses. However, these games, especially violent ones, do come with some disadvantages too. These games usually normalize violence and may easily influence impressionable minds. With many players opting for lighter, entertaining games that act as a brain teaser, a slow shift towards skill-based games can be observed amongst the younger audience as well.

Skill-based games don’t have such harmful effects. In fact, the gains from playing games like chess, sudoku, rummy etc. far outweigh their disadvantages, if any. Games like rummy act as a mental stimulant. These games enhance memory since players need to remember different moves during a game. Players also learn to take quick decisions as they might lose otherwise. The games also improve the coordination among various senses and physical movements. Since the brain receives different stimuli from visual and auditory, at the same time, the reflex action of the players prompts them to pick up or discard cards deftly.

Rummy players may gradually develop multi-tasking skills since they need to simultaneously arrange, pick up and discard cards while observing the moves of their opponents. In an online rummy game, there is a great opportunity to play with various types of players. While playing rummy or chess, people need to interact and engage with various players. This can also help players improve various personality traits and decision-making capability. This freshness in opponent skills and variation in the levels is what keeps such games interesting for players.

Since most people prefer shorter levels and simpler controls while playing, skill-based games that often have few to no levels in games can help people squeeze in a bit of gameplay in during their work breaks or travel. Skill-based games also offer a way to satiate the competitiveness of players. Since games such as rummy have a clear winner chosen at the end, it gives the winner a confidence boost knowing that they were able to beat their opponent through their mental prowess.

Moreover, players have the opportunity to win rewards, and many players are finding the idea of winning prizes and rewards along with the thrilling experience doubly attractive. The Supreme Court of India has ruled that rummy is a skill-based game and is legal. While other action games can have their gameplay influenced by various factors, a skill game such as rummy only depends on your skill and the skill of your opponents. So, start sharpening your mental skills today by opting for your favorite skill-based game online. To get your hand on some fun with rummy online, download the RummyCircle App from the website.