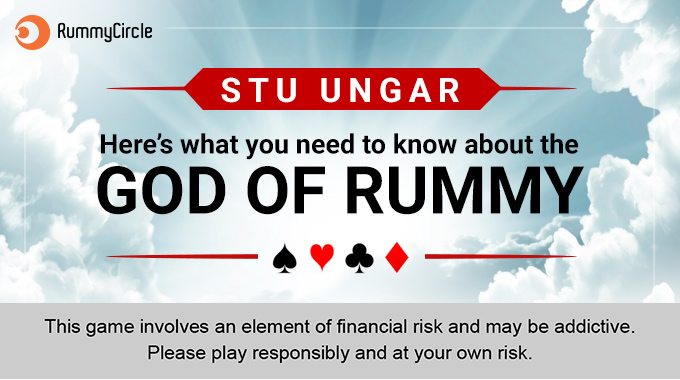 Decades before online Rummy picked up pace, a twenty-something man, called ‘the kid’, was already making history out there. A Rummy prodigy, Stuart Ungar (or Stu Ungar) was 5 feet, 5 inches tall with just about 100 pounds weight – so much so that nobody would have contemplated the rise of this kid as one of the most renowned names in the Rummy today. Born to Jewish parents in 1953, Ungar was raised in Manhattan. He learned tips and tricks related to card games from ‘Foxes Corner’, his father’s social club. The legend lived a relatively short but utterly famous life.

“ I swear to you, I don’t see how anybody could ever play gin Rummy better than me.” – Ungar

Per Hendon Mob, Ungar participated in thirty-five live tournaments and won sixteen out of them. Nobody could match Ungar’s degeneracy and genius especially when it came to Rummy. Playing card games as a teenager on the streets portrayed an uncanny ability in Ungar to play cards. Naturally, after playing a few games in his hometown, he then arrived in the ‘Sin City’ – and then the rewarding journey took over.

1. Harry Stein and Ungar – What determination can do.

Ungar wasn’t viewed as a threat when he initially started playing since everybody took ‘the kid’ lightly. But Ungar didn’t fail to cement his place of being the greatest Rummy player of all times. In his early days, he had to search for opponents who could play as good as he does (or close). Harry Yonkie Stein, who was the then best Rummy player in America came to know about it and chose to meet the overconfident ‘kid’ in New York. Stein’s goal was to teach a lesson to Ungar at first, but on his arrival, he looked at Ungar who had to place a crate on the chair as his height booster to sit and play comfortably.

Stein gave a perplexed look and assumed the match would be over in a jiffy – he was right. Ungar won by 86-0. Stein retired from the game of Rummy after that day.

The point? It’s about having confidence in your skill and being persistent on learning more about the game every day. Winning and losing is a part of the game, but learning is a takeaway.

2. When we say Online Rummy is a memory game, we mean it!

And Stu Ungar is a testimony to it! One of his close friends, Mike Sexton noticed Ungar while he used to play in the early days (we call them practice games). Ungar used to assign a number to every card in his head on the basis of rank and suit to calculate the value of every card in his deck. After adding up the value of each card while flipping them, he subtracted the total number from 51. The result? He could easily identify the last card on deck on the basis of the number assigned to the value.

Ungar believed in mathematical brilliance while playing Rummy and card games, that’s what led him to the glory. If this isn’t a sign of genius, we don’t know what is.

3. Keeping your opponents confused? Learn from the best!

Ungar never used to sort his cards to keep the opponents guessing. Nobody ever knew what numbers or suit he was dealing with. Instead, he used opponents’ cards sorting as an advantage. One of his close friends said “Stu could guess every card in his opponent’s hands. So much so that it was spooky.”

While most of you believe in sorting your cards when the game starts, try to confuse the opponent this time and see what happens?

After a few health conditions in 1980, when he came back in 1997, commentators called him ‘The Comeback Kid’. Ungar didn’t fail anyone and managed to win a lot of titles right after.

The words on his headstone rightly describe ‘The Kid’ – Great person, but a greater loss.