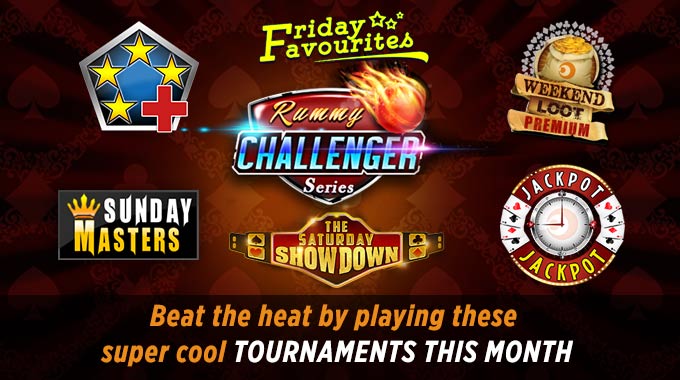 The dry Indian summers have officially begun! It’s time you prepared yourself for a few months of incessant heat, and rising temperatures before the monsoons take pity on you. For most people, there are two ways to escape the heat – take a trip to a cool hill station for a few days or simply stay indoors. The latter offers the perfect opportunity to hang out with family and friends, play rummy online and just relax while the sun does its thing.

Since RummyCircle understands just how frustrating it can be to stay cooped up indoors for so long, it has made the wait easier with a multitude of tournaments that rummy aficionados from across the country can participate in. Here are some of the best tournaments to indulge in this summer:

You must have heard the buzz around this mega championship, that combines both offline and online tournaments, with the Finale at Goa. With a winning pool of over Rs 1 Crore, the Grand Rummy Championship is arguably the richest tournament on the roster of RummyCircle. This is an actual championship that is taking place, and prospective competitors may partake in the multitude of qualifying matches in order to be able to contend in the GRC Championships. There are tournaments happening every day and players can register and start playing. Only 280 top finalists will go for the Finale to held at the Grand Hyatt Hotel, Goa from May 10-12.

This championship is more than just a tournament. Players enjoy an all inclusive 3 nights and 4 days stay plus all travel arrangements taken care of. Competing with the sharpest rummy minds and playing the biggest rummy tournament comes alive with Grand Rummy Championship.

The other tournaments players can join and play

As long as you know how to play rummy and want to play rummy online, RummyCircle has a tournament tailor-made to suit each and everyone’s appetite. Within these 7 categories of tournaments are many more tournaments, all made to suit a hot and sultry summer day when it is too hot to go outside. The prize money is the draw for some, the thrill of a quick tournament for others, but what everyone who partakes in these tournaments is guaranteed to win, is loads and loads of fun!