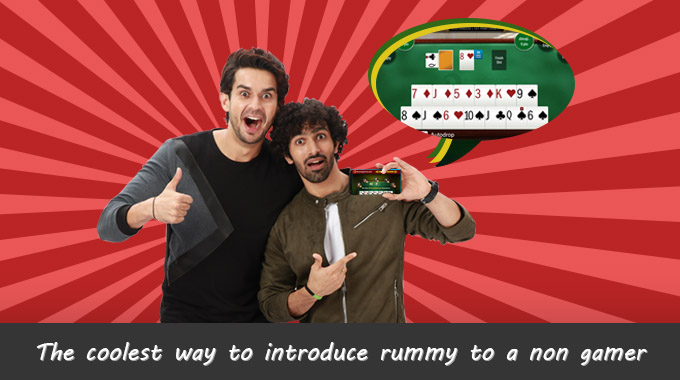 The Coolest Way To Introduce Rummy To A Non-Gamer

The world certainly looks a better place to live than it used to be as you have mastered the game of Rummy. It goes without saying your pastimes are worth spent nowadays and you enjoy exhibiting your skills and intelligence with other Rummy players across India. All that’s fine. Now isn’t the right time to show gratitude to a game that has made you famous? So, without further ado, take the game to the non-gamers and introduce them to learn and play the game. Let them also play rummy online and enjoy the thrill of winning. Here are some of the coolest ways of introducing the game of online Rummy to the non-gamers.

Age-old beliefs in people’s mind do not go away easily. Do they? “Oops Cat has crossed my path. It’s a bad omen. So, I better go back home.” “Oh no. Tortoise has entered my home. Soon I may lose my wealth.” When such superstitious beliefs rule people’s mind, having been believed by them for ages, it is not easy to eradicate them quickly. Likewise, it is very difficult to convince reluctant non-starters to try a game like online Rummy as they view the game with suspicion since it involves money transactions. So how to make them understand that the game is totally legal? First things first. Make them understand that Honorable Supreme Court of India has given a clean chit to the game of Rummy claiming it to be a game of skill alone. So first clear this delusion in people’s mind that anything being played for money is illegal, before recommending them the game of Rummy.

Some people may not be totally convinced as the gamers need to be told that the game of Rummy indeed is as innocuous as how it is perceived by the Honorable Supreme Court of India. For that to happen, they have to be shown the Rummy blogs appearing in many online Rummy sites, carrying user level experiences which can convince non-gamers that the game of Rummy is indeed safer to play and has no legal ambiguities and implications attached to it. Since there are numerous blogs getting published regularly, the non-gamers will be satisfied that the game is being played 24×7, free of any inhibitions.

Even an ambitious gamer will be iffy about stepping into the world of online Rummy because they will be wary of the leakage of private information and the bank data. It is natural for anyone to be worried about their personal information getting divulged to the outside world. So, it is your responsibility to take them into confidence and convey the safety techniques and protected payment gateway available in the Rummy sites. Also, it is equally important that you lead them to the proper Rummy sites that can be trusted and are completely safe to play. Most of the Rummy sites including RummyCircle have a mechanism to block sensitive personal Information getting shared to employees, contractors and agents. Also, the gamers need to be informed of the secure payment gateway and ease at which the transactions can happen and also the withdrawal process which is very much simplified, to say the least.

Let them understand the benefits of Rummy:

The non-gamers should be taught in detail the benefits that accrue on playing Rummy. List out the advantages of the game such as how one develops good qualities like leadership, decision making skills, rational thinking, overcoming stress, etc., They also should be made to understand how the pastimes can be worth spent and how the lull periods during long travel and traffic jams can be efficiently utilized by playing Rummy game. When the benefits are thus excessively told to them, the non-gamers will be eager to try their hand in the game of online rummy.

Lead them to Rummy sites and Rummy videos:

Unless and until one gain his own experience of online rummy, he or she will not believe in it. Unless a non-gamer register himself to play the game in an online Rummy site, he will not be able to understand the pros and cons in it, isn’t it? Let him have a look around on each of the Rummy sites and see the videos of the tutorials on how to play rummy. Make him see the videos of the matches happening between two expert players which will give him an idea of how the game is played. Also, brief him of the cash tables and tournaments happening every day. Ask him to browse and see all that you have briefed, himself. Such friendly guidance will encourage him to get closer to the game.

When you meticulously follow the above steps, you will be succeeding in bringing many newcomers to the world of online Rummy. By giving a proper briefing by the virtue of your own experience, you can easily introduce the game of online Rummy to the masses.