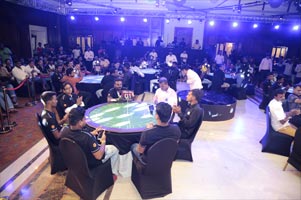 Mumbai 22 May 2018: India witnessed the first ever mega Finale for the Grand Rummy Championship (GRC), held on 18-19 May 2018, at the Lalit Spa and Resort, Goa. With 215 best Rummy players from all over India the tournament saw some dramatic games and nerve-wracking excitement. Together with the international performances and awe-inspiring dinner party, the Grand Rummy Championship gave RummyCircle players a night to remember.

The month-long online qualifiers hosted on RummyCircle.com were participated with immense enthusiasm by thousands of players. The 215 players who finally made it to the Goa Offline Finale experienced a championship that was truly grand in all sense. The royal treatment of the players and mesmerizing atmosphere made all the efforts of these players worth every bit.

After four exciting rounds of play, Mr. Mandava Subrahmanyeswara Rao from Andhra Pradesh finally emerged as the winner of the Grand Rummy Championship, 2018. He received the cheque of 20 Lakh INR as the first prize. Ala Venkateswarlu, the first runner-up walked away with 10 Lakh INR while Mr. Ravibabu Kotla stood as the second runner-up, with a prize amount of 5 lakhs.

Grand Rummy Championship became a platform to experience the best of rummy gameplay, packed with live performances, gala dinner and drinks. What it offered the players was an experience of a lifetime that each player carries in his heart. As rightly stated by Baskaran.M, "I thank RummyCircle for the complete experience. From the grand welcome given at Goa Airport and pick-up from there to Hotel Lalit, it is great. Further, excellent breakfast, lunch, and dinner arranged by your end. Also, fantastic arrangement for the offline rummy game along with fabulous singing and dance programme. It was very enjoyable trip." 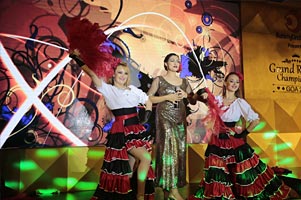 One of the things that was given the most prominence was to provide the same playing experience as it is there on the RummyCircle.com website. The game was structured in a way that players would enjoy rummy, just the way they do on the website or app. Further, a scoring software was used to calculate all scores and did away with the possibility of manual error entirely.

Adding further, Co-CEO and Co-Founder Bhavin Pandya said, "GRC was all about giving an unmatched live rummy playing experience in a fun and grand way. We wanted to make each of our players feel special and allow them to enjoy this first of its kind live rummy championship, we truly wanted to provide the Best Rummy Experience!"

To enjoy the best of online rummy, join RummyCircle and start playing rummy today. With the biggest of tournaments, events and cash prizes, this is the place for the best rummy experience.

About Play Games24x7 Pvt. Ltd. Launched in 2006, Play Games24x7 is an online desktop and mobile gaming platform that has leveraged technology to bring people an awesome experience by playing games that they have always loved and enjoyed. The very affable Indian card games, Teen Patti and Rummy that were restricted to the living room during the festivities, are now played every day at a competitive level in the limitless digital world. During the annual tournaments, winners have even walked away with sponsored trips abroad!

Backed by a strong technical support team, seamless payment gateways and engaging user interface, Play Games24x7 launched RummyCircle on mobile and the desktop and has seen millions of registrations, clearly indicating the role that technology has played in transforming the experience of playing card games. In the past, the company has also seen investment from the Tiger Global Management, a leading hedge fund manager. Play Games24x7 launched Rummy on RummyCircle and Teen Patti, Rummy, Poker and Bet Cricket under Ultimate Games banner, and has recorded cumulative thirteen million registrations and downloads for all the games put together.