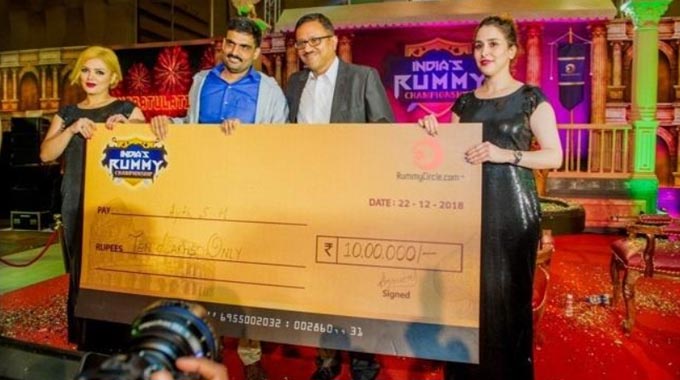 This year, RummyCircle brought in the festive spirit with a healthy dose of challenging rummy games where the best players competed in India's Rummy Championship (IRC), held at the Taj, Bengaluru on 22nd December 2018. The championship awarded over INR 50 lakhs in prizes over the four-week-long schedule which consisted of the online qualifiers and the offline IRC event. Mr. Ajit S H, from Karnataka, was crowned the winner and awarded a whopping INR 10 lakhs.

What could be a better gift for a rummy player than to participate in a grand tournament and get an opportunity to win big cash prizes? This was exactly what the holiday had in store for the IRC finalist. An incredible 261 finalists participated, generating a prize pool of INR 50 lakhs. This was the 2nd successful offline tournament hosted by RummyCircle after the Grand Rummy Championship, held in May 2018. The live event brought the best of rummy enthusiasts on one table, giving them an evening to remember.

The IRC added a bit of twist to the event with a state theme, grouping the participants in three broad teams; Karnataka Knights, Tamil Titans & Andhra Avengers. With the first prize awarded from Karnataka, all players from Karnataka Knights also received free tickets to the Sankranti Rummy Tournament in January 2019 which boasts a prize pool of INR 1 Crore. The evening was further marked with live performances, gala dinner, and nerve-wracking excitement.

The event had a special celebrity guest, Ms. Mandira Bedi who not only hosted the event but also added to the thrill of rummy, encouraging the players all through. The event opened with the famous drum performance, followed by singing performance by Rupali Kashyap & the dance troupe.

India's Rummy Championship is an exposure that gives the feel of online rummy while coming face to face with the best of rummy players from the country. It acts like a bridge blending the rummy experience in both the offline and online world, perfectly. As rightly stated by IRC winner Mr. Ajit S H of Karnataka, "I started playing on RummyCircle about 9 years back. I won Rs. 1000000 in IRC held at the Taj hotel, Bengaluru. I really feel happy and it was an amazing and wonderful experience to win the big final. I won several tournaments and cash prizes on this site. It is the best online Rummy site as it is genuine, transparent, and quick in customer service. The real winner is RummyCircle as an ordinary man can win any amount of money here. Keep up the good services."

One of the aspects that were of most prominence was offering the same gameplay experience as on the RummyCircle website. The game was structured in a way that players would enjoy rummy, just the way they do on the website or app. Further, a scoring software was used to calculate all scores and did away with the possibility of manual error completely.

Adding further, Co-CEO and Co-Founder Bhavin Pandya said, "We believe in offering our players a warm and stimulating environment, where they can interact and meet the top rummy players from India. The RummyCircle team is at the heart of this success, giving the time and effort needed to understand player requirements and thereby focusing on offering better tournaments each time."

To enjoy the best of online rummy, join RummyCircle and start playing rummy today. With the biggest tournaments, events, and cash prizes, this is the place for the best rummy experience.

Launched in 2006, Play Games24x7 is an online desktop and mobile gaming platform that has leveraged technology to bring people an awesome experience by playing games that they have always loved and enjoyed. The very affable Indian card games, Teen Patti and Rummy that were restricted to the living room during the festivities, are now played every day at a competitive level in the limitless digital world. During the annual tournaments, winners have even walked away with sponsored trips abroad!

Backed by a strong technical support team, seamless payment gateways, and engaging user interface, Play Games24x7 launched RummyCircle on mobile and the desktop and has seen millions of registrations, clearly indicating the role that technology has played in transforming the experience of playing card games. In the past, the company has also seen investment from the Tiger Global Management, a leading hedge fund manager. Play Games24x7 launched Rummy on RummyCircle and Teen Patti, Rummy, Poker and Bet Cricket under Ultimate Games banner, and has recorded cumulative twenty-eight million registrations and downloads for all the games put together.