RummyCircle.com in PR Newswire « Back 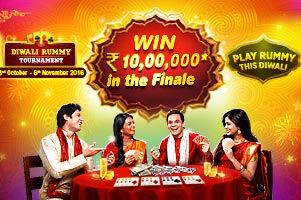 Win Crores in the Diwali Rummy Tournament ™ by RummyCircle

Mumbai, October 28, 2016: India's largest rummy site, RummyCircle’s annual Diwali Rummy Tournament™ (DRT) is bigger than ever and offers its players a Diwali prize pool win of a whopping 2 crores. The month-long celebration commenced on the 3rd of October and the site is showcasing a new theme every week.

Recently, Mr. Srinivas Rao from Hyderabad shared his excitement saying, “I have won Rs. 1500 and a ticket to Diwali Rummy Tournament and I am confident of winning Rs. 10 Lakhs in the finale.” His confidence is shared by over 1400 players who have won the ticket to the finale. Further, there are over 2000 more tickets and cash prizes to be won.

The participants battle to reach the Weekly Finale every Sunday to qualify for the Grand Finale and grab prizes up to Rs. 30 lakhs. Qualifying finalists compete in the Grand DRT Finale at 3 PM on the 6th of November to bag the first prize of Rs. 10 lakhs, the biggest giveaway in the history of rummy in India.

Play Games24x7 Co-CEO and Cofounder Bhavin Pandya said, “With Rummy being one of the most loved Indian card games, we have witnessed a phenomenal growth in the Diwali Rummy Tournament over the last seven years. The growth has been fueled by greater awareness about the game in addition to the proliferation of smartphones and internet usage. The fun of playing the traditional card game on Diwali is enhanced even more on the digital platform with interactive user interface, language options and a chance to compete against the best players across the country.”

Conceptualized in 2009, the Diwali Rummy Tournament™ has seen the number of players increase from 3,000 in 2009 to a whopping 4,20,000 in 2016. Indicating the growing talent of participants, the number of players qualifying for the Diwali finale has gone up from 820 in 2009 to 38,000 this year. The players winning the tournament Finale have also grown 13 times in the last 5 years.

About Play Games24x7 Pvt. Ltd.
Launched in 2006, Play Games24x7 is an online desktop and mobile gaming platform that has leveraged technology to bring people an awesome experience by playing games that they have always loved and enjoyed. The very affable Indian card games, Teen Patti and Rummy that were restricted to the living room during the festivities, are now played every day at a competitive level in the limitless digital world. During the annual tournaments, winners have even walked away with sponsored trips abroad!

Backed by a strong technical support team, seamless payment gateways and engaging user interface, Play Games24x7 launched RummyCircle on mobile and the desktop and has seen millions of registrations, clearly indicating the role that technology has played in transforming the experience of playing card games. In the past, the company has also seen investment from the Tiger Global Management, a leading hedge fund manager. Play Games24x7 launched Rummy on RummyCircle and Teen Patti, Rummy, Poker and Bet Cricket under Ultimate Games banner, and has recorded cumulative five million registrations and downloads for all the games put together.