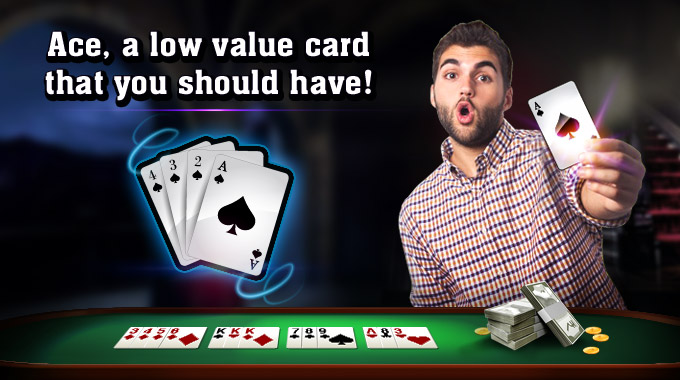 Ace-A Low-Value Card That You Should Have In Rummy

When you play a game of rummy, there is one card that has a sweet – sour result to your hand. After the joker, ace is an intriguing card. From its value to scoring of the hand, there are several unanswered questions. It is a low or high-value card? Should you keep or discard it?

It is interesting because in other card games too, aces have varying point value. For instance, in blackjack, the value of aces is either 1 or 11. The player is allowed to choose the value. In Solitaire, the value is higher than the king. Ace is the only card that has a duality value depending on the card game. It makes it a flexible card, but it is important to know the value before starting a game.

History of the Ace:

In the 21st century, the word ace equals to being at the top, a pro, and the best. This was not the case, centuries ago. This word was derived from the name of a small Roman coin ‘as’, which is an Old French word and it means ‘a unit’.

Back in the days, before the term was introduced to the card game, it was associated with the side of a dice with one pip. It had the lowest value. Hence, it was deemed bad luck to roll an ace. Over time, it came to be known as the highest value and linked to top-notch quality.

Talking about history, the ace of spades has an interesting tale to tell too. Why do the aces have a single suit symbol in the centre, which is decorated, especially the ace of spades? It dates back to the time of King James the Sixth. He wanted printing houses to have their insignia on the ace of spades. It would help in identifying the printing house and stamping it made it an authorised deck of card. Also, it meant they have paid the new stamp tax.

Even though the tax was abolished, card makers have carried on the tradition. Also, in other countries, the stamp and tradition vary. For example, in France the decorated insignia is on ace of clubs and in Russia it is on ace of diamond.

Coming back to rummy, more specifically Indian rummy, we delve into the various aspects of the Ace to the game.

There are four aces in a deck of cards. One ace for each suit – hearts, diamonds, clubs, and spades. In rummy, the ace is a lower and top card. In the sense, you can form a sequence of Ace-2-3 or Ace-King-Queen. However, the value of the ace remains constant, which is 10 points.

So, if you plan to include ace before a 2 in a combination, it will spike up your points at the end. In either combination you place the card, it will increase your points, if you lose that game. Hence, use the card wisely to lower the score. If you have three suits of aces, you can combine it to form a set.

However, on this platform, this rule is invalid. Afterall the game should be challenging, right? If the rummy game was easy, then it would not be entertaining.

What is the Possibility of picking an Ace?

The ace seems like the card to have if you have a winning hand. The possibility of picking an ace is 4 of 52. There are 52 cards in a deck. There are four aces of each suit. Hence, you have four opportunities to pick an ace.

But in Indian rummy, you are playing with two decks of cards, which includes 104 cards plus four printed jokers. Hence, the possibility of picking an ace increase to eight of 104 cards.

Who knew that the aces have such an interesting history. Each card game has its own rule in terms of using this card and its value. What is left to do is to get the rummy app and try to use the ace judiciously. There is nothing confusing about how and when to use the aces in rummy. It can be combined with low or high cards, but the point value remains the same.