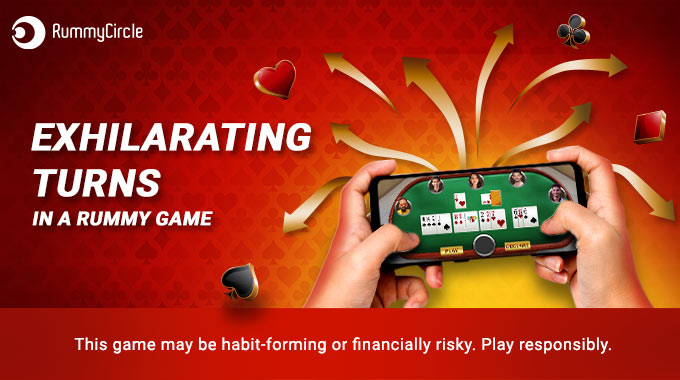 Exhilarating Turns in a Rummy Game

Rummy, played since the 18th century by card enthusiasts, has maintained its popularity in the digital world. Millions play it on the various card gaming platforms that have cropped up in the recent past.

Indian Rummy, played with 13 cards, has spawned its mini-industry online. It is the most played online card game. Rummy is a pick-and-discard game, but it is not as simple as it looks. It involves skill, strategy, and practice. A social gathering must; the game comes with its unique brand of fun, frolic and exhilaration. Ask anyone hooked on the game both offline and online.

Rummy can be played by 2 to 6 players. Players are dealt 13 cards each, and one is required to make sequences and sets. A sequence is defined as successive cards of the same suit, and a set is three or more cards of the same number of different suits. Jokers play a unique role here and can be used to fill a vacant spot on a sequence or set. Whoever completes the required sequence and sets first is declared a winner of the play. The final winner is determined on points. The one with 0 points wins the game. The number cards carry the same weight as their face value, and the higher value cards such as the ace, king, Queen and Joker carry ten points each.

The online rummy game comes packed with some exciting features. Unlike the offline version, here, you cannot ponder over your next move. The decisions are to be made fast and furious. The various gaming tables require fast and snappy gameplay. Decisions need to be quick and wise. It is all about keeping one step ahead of the opponent and planning the next move.

Hence, the game requires a calm mind and patience. Anyone who gets hassled and dithers over decisions is bound to face setbacks in the game. Playing in such a charged atmosphere is electrifying and entertaining. After a round of online Rummy, you are bound to feel refreshed and rejuvenated.

On RummyCircle, one can multitask too. If you want, you can play on more than one table. But remember, do not be overconfident and try to spread your energies. First, hone your skills in the practice games. RummyCircle offer practice sessions and even recommend them to newcomers.

But one thing is sure; there is a thrill associated with testing your skills at multiple tables at the same time. And if you do it efficiently and win simultaneously then it is like a double win.

Skill and Strategy Save the Day

Rummy is all about making the right decisions. There are times when one has to discard a much-wanted card or break a sequence or move around cards for the win.

A pure sequence is a requirement for declaring in Rummy. But there are times when the crucial card escapes your hand when the opponent deliberately withholds it. It would be prudent not to hold on to the sequence and break it up fast before the game ends. Or you can even move around the cards. If the sequence is a 7, 8, 9. and 10, you can move around the 9.10 to add to the face value cards such as a J and Q. Or do it the other way round and move the 7 and 8 to a 6 and 5. But remember to not hold on to the cards for long.

Another trick is to use the wild joker. A wild joker can be used to complete a pure sequence if it is used in its original value and not as a substitute for the missing card.

Online rummy platforms have other exciting features, such as cash games and tournaments that one can participate in. There are competitive games announced online almost every day. People who thrive on challenges can test their skills with other competent and skilled players. Playing and winning in a competition is both rewarding and thrilling.

RummyCircle also offers a gamut of rewards and bonuses to keep you motivated.