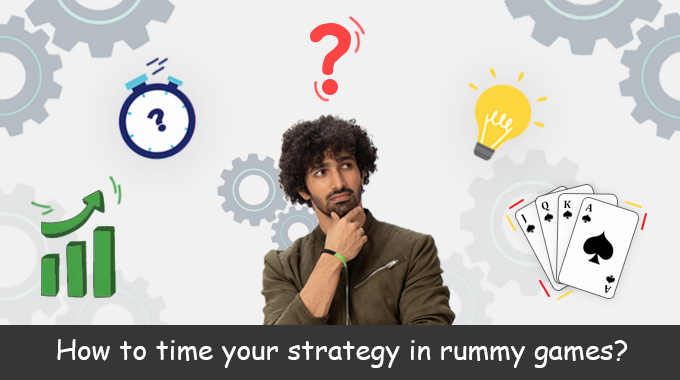 How To Time Your Strategy In Rummy Games

Rummy is a game of skill which requires carefully carved out strategies and plans to emerge triumphantly. In fact, Rummy quite easily thumps over any other game purely in terms of the usage of refined strategies.  It is simple to plan a strategy in a game where everything is out in open like say, chess, i.e., your opponent’s coins are visible to you and so are his moves. But in a game like Indian Rummy, where you have no idea of the type of cards your opponents are holding and the moves they are making, on what basis you can strategize your own moves? This is the biggest challenge in a Rummy game where the timing of your strategies is very much pivotal. Let us now see how to time your strategies in online Rummy.

As soon as you have the dispensed cards with you, you need to start forming the pure sequence. A pure sequence is nothing but grouping three or more consecutive cards of the same suit without the usage of a joker card. It is like a lifeline for a Rummy player that comes to his rescue when his opponent declares. In case a pure sequence is not formed, the value of all the cards in hand will be summed up and added to his points tally. If a pure sequence is formed by him, he can escape getting the points thus accumulated. So as soon as the cards are dispensed, let pure sequence be your priority.

This is the immediate ploy to be adopted as soon as you get a bad hand. A bad hand in Rummy is nothing but a disastrous situation wherein one finds no workable combination to form a pure sequence in many turns to come. Least one could do when faced with such an unfriendly situation is discarding all high-value cards in hand immediately on each turn so that when an imminent declaration comes from his opponent, he is not burdened with more points. So, whenever you get a bad hand, immediately start discarding high-value cards without thinking twice.

This is an option you can use whenever you feel it is becoming increasingly difficult to form the pure sequence. You can either drop the game immediately at the beginning itself which is called a first drop and when you do it in the middle of the game it is called a middle drop. Dropping is used as a strategy when you feel losing the deal gracefully is better than a tough fight till the end resulting in a defeat. Your first priority as a rummy player should be forming a pure sequence and another sequence with or without a joker card. If you find numerous unmatched cards and cannot find a joker card, it is always better to drop the game. Whereas the first drop leaves you with 20 points, the middle drop gives you 40 points. So, it is a better strategy to drop the game as soon as possible and carry fewer points instead of burdening yourselves with huge points.

This art of bluffing as a strategy should be used very rarely as a surprise element. It is used when you are dealt with a bad hand. Before bluffing is done, you need to have a closer watch at your opponent’s moves. If you find him not picking up the cards from the open deck on four to five successive turns, it means he is struggling with a bad hand himself. So, when you are satisfied with your guess, you need to start this strategy called bluffing by picking up cards from the open deck at a stretch on each of your turn which can confuse your opponent into thinking that you are about the declare the game. When he starts believing so, being fooled so by you, he will immediately drop the game, leaving you winning it.

You don’t need to stick to any timing when it comes to tracking your opponents. It should be a continuous process which gives you an idea of how to make your own moves. You need to keep an eye on the discarded section which gives you a view of the cards getting discarded by your opponents. This again will indicate the sort of sequence formation your opponent is looking for. When you see your opponents discarding certain type of cards, try to discard the ones very similar to them so that your opponents will not be interested in using the same. Again, your opponents may purposely be discarding those cards to confuse you, you never know. Only your instincts developed through the experience that you have gained will give you a thorough knowledge about the game play.

So, note down all the critical strategies mentioned above and use them at the appropriate time as mentioned. Rummy is a game of skill which can be won only by timing the strategies perfectly.