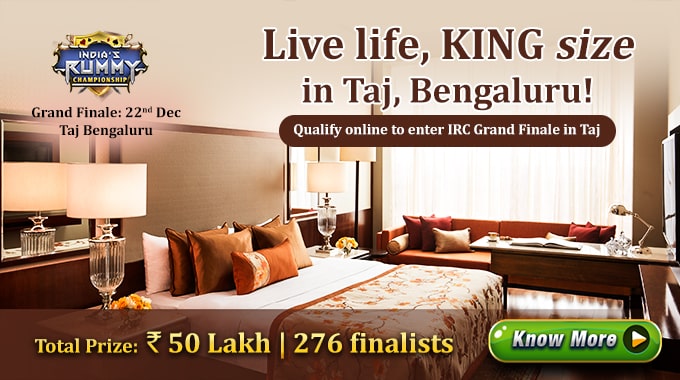 The wait is finally over. The time has arrived for the Rummy players to vacate their drawing rooms and breathe some fresh air outside. The enchanting game of Rummy which has been man’s best companion during his pastimes for quite a while is now available to be played for a coveted national level championship. Thanks to the initiative by RummyCircle – one of the foremost stakeholders of this most popular card game in India. Having had the experience of playing multiplayer tournaments throughout the year online, the Rummy players are now well accomplished to participate in a face-face championship of this magnitude just like a professional of any organized sport with RummyCircle facilitating the same. So, without further ado let us now see the importance and the format of this championship in detail.

What is an Indian Rummy Championship?

This championship is a combination of several offline and online tournaments played for cash that started from 15th November. These are qualifier tournaments.

The kick off date:

The Indian Rummy Championship for the year 2018 has already kicked off and the qualifiers which started on 15th November is about to conclude on 9th December. At the end of qualifiers, as many as 276 players will be selected to play for the most adorned trophy of the Indian Rummy.

The moment when a championship is organised, it is only natural for the participants to immediately get curious about knowing the prize money which they are about to win at the end of the day. The prize pool offered by the RummyCircle, rest assured, is not inferior to the ones offered in any other sport. A whopping sum of Rs. 50 lakhs is the prize pool offered in IRC with the winner alone getting a staggering sum Rs. 10 lakhs. There is no disappointment for the rest of the participants either as everyone is guaranteed a sum of Rs. 5,000/- each irrespective of the final standings.

A surprise element awaits all the participants as the championship is set to be hosted by a very popular celebrity, undisclosed as of now. So, an edge of the seat suspense is guaranteed on this live event.

This is the step by step path to progress into the grand finale.

The following are the facilities offered for free to the finalists of IRC:

However, the travel arrangements for the To and Fro have to be self-arranged by the participants.

Here is how the entire tournament is planned and scheduled.

Points to be noted:

A participant of IRC should be aware of the following things.

So, what are you waiting for? If you are an expert who knows how to play Rummy, and has been a regular user of RummyCircle then why not give it a try? After all, you have nothing to lose, isn’t it? If you happen to win, forget about the cash money, think about the laurels you will be credited with and the recognition that you can get. A worthy try indeed after all! So if you you don’t have Rummycircle app yet, download this rummy app now.