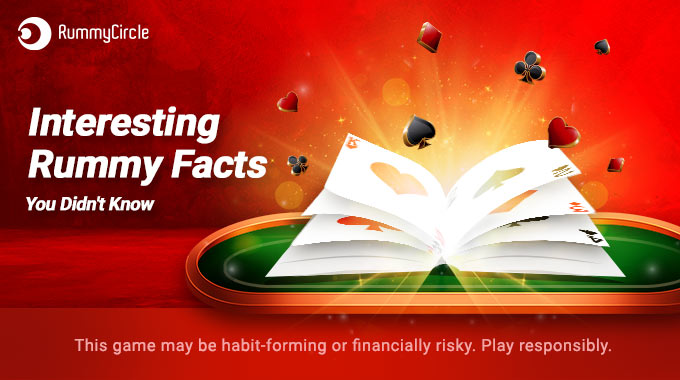 Rummy is a game that many people throughout the globe love playing. Particularly among Indians. It is a very well-liked game nowadays and you can play online rummy free of cost. RummyCircle offers free games to practice and brush up your skills and cash games to win attractive rewards. Many devoted online rummy players take pleasure to demonstrate their expert knowledge of the game.

Although rummy has been around for a while, many people are still unaware of some of its exciting facts. There are several interesting facts about rummy that you may or may not be aware of.

See which of the information regarding the rummy card game you already knew and which you didn’t by reading the facts below:

Rummy is said to have originated from the card games conquian and kanhoo. When it comes to conquian, it started popularizing in the nineteenth century in Mexico. The goal of this well-known game of formation is to create the necessary combinations by removing the cards from your hand. By the completion of the game, 11 cards should remain in the players’ hands.

Whereas kanhoo uses a draw and discard strategy. It is thought that this trick-taking game, which initially originated during the Ming era, may have been a precursor of rummy. In addition to these two, mahjong, based on drawing and discarding tiles, is said to have influenced rummy.

There are more than 60 different versions of the rummy game that you can enjoy. The melding type of rummy game includes combining cards to get a certain number of points. The games rummy 500, marriage rummy, Indonesian Remi, and Rommé are all well-liked options in this genre.

The contract type of rummy games consists of achieving certain goals, which may or may not be revealed to the rivals. Kaluki, contract rummy, Liverpool rummy, and dummy rummy are popular games in this genre.

One of the most played types of rummy is Indian rummy has three variants i.e. points, pool, and deals. All of these variations are available to play and enjoy on RummyCircle.

Many individuals like playing rummy, but some players really take their passion for the game to new heights. To prove that, there is a 500-point record margin for the greatest score in rummy. If you play rummy, you are aware that winning by such a significant margin could only have been made possible by an unwavering commitment to the game. Since nobody has yet been able to break the record, it continues to stand today.

One of the greatest players at poker, blackjack, and gin rummy was Stuart Errol Ungar, who was only 10 years old when he took first place in a gin rummy tournament.

Perhaps the most useful card in rummy is the joker. But did you know that until Americans added it during the Civil War, it wasn’t always a component of the game? That’s true. It was first developed as a trump card for a different card game called Euchre. The Americans went on to incorporate trump cards in rummy since they enjoyed playing this game.

Gin Rummy, like Indian Rummy, is a popular rummy variant in the United States. In the 1940s, it became popular in America, a game in which the team with the first 100 points wins. Elwood T. Baker and his son C. Graham Baker founded it in 1909. It is still a very popular card game for two players.

It should come as no surprise that rummy has its own name among Indians given that it is one of the most played card games in that country. Indian Rummy is often referred to as Paplu.  The phrase is in fact used in rummy terminology. The other two terms used while playing rummy are Nichlu and Tiplu. These three terms are used in the game of rummy to describe the three-point cards. Because it was primarily played as a kind of entertainment during wedding rituals, paplu is also known as marriage rummy.