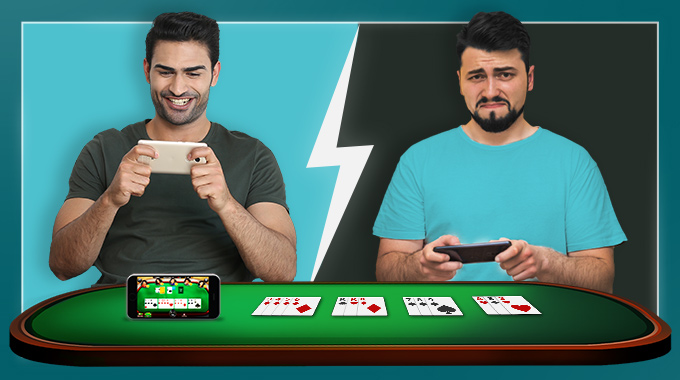 Winning any card game is a combination of two factors: the cards you get and the strategy you apply. You can’t control how the cards fall but make the best use of the hand you have been dealt with. If you pay close enough attention, you can predict your opponent’s move too. If it’s a friendly rummy game at home, with family, it’s easier. But what if you’re playing online rummy, with an unseen opponent? How do you read a hand like that? If you can’t see your opponent’s face, the simple solution is to observe his/her game. Here are five moves you can anticipate your opponent to make when they have a bad hand.

This might seem like an obvious tell, but it is important. If your opponent seems to be discarding a slew of high-value cards – Jack, King, Queen or Aces – it’s an obvious sign that he or she is trying to reduce the point load you may stand to gain. A player with a winning hand won’t reduce the points that can be gained by getting rid of point-heavy cards. There is a possibility that this may be a bluff to get you to play a more reckless game, but it’s a risky one, and your opponent surely stands to lose more than you. Discarding high-value cards is the biggest sign that your opponent has a bad hand.

This may seem like a complete opposite of the previously mentioned move, but it’s also a very likely one. You might think there’s no reason for someone with a bad hand to discard low-value cards and increase the points you stand to gain, and you’d be right too; but only if your opponent was playing a completely straightforward game. A more seasoned player may discard a lot of low-value cards as you come close to finishing your game. This is done to demoralize you and make you question yourself. If everything you’ve seen to that point indicates that your opponent has a losing hand, don’t let such last-minute moves throw you off your game! Pay close attention, but don’t let it confuse you.

If your opponent has a bad enough hand, he or she might altogether quit playing the odds and decide instead to play the opponent – you! If your calm and measured opponent starts to play a loose and fast game as the game progresses, there’s a good likelihood such confidence is a bluff. These are harder to identify, so you can only truly anticipate this based on every other move made by your opponent. There’s a possibility your opponent could’ve been bluffing from the very start, in which case you need to remember to rely on the control of your own hand more than that of your unseen opponent. However, if the player you are playing against has a bad hand, you can definitely expect a couple of sudden and uncharacteristic moves that could be bluffs.

Picking Up A Lot Of Middle Cards

When one’s hand offers no true hope, a smart player will try to gather middle cards that are more likely to form a sequence than high-value cards. If your opponent is picking up a lot of fives and sixes, it may be because it’s easier to put them in a sequence. Basically, he/she is reaching for the cards that might offer an opportunity at victory because his/her hand has none. It’s only a ballpark figure, but if your opponent is paying a lot of attention to middle-value cards, it’s certainly a sign.

Not Picking Up Cards From The Closed Deck

A player with a winning hand will eventually start picking up more cards from the closed deck for a faster victory. If your opponent is judiciously avoiding the risk that comes with the closed deck, then he/she is likely nowhere close to finishing the game. There’s a probability he/she could also just be a rather cautious player, but it’s surely something to observe. By itself, an unwillingness to touch the closed deck might not mean much, but in conjecture with the other moves on this list, it’s safe to assume your opponent has a losing hand.

Of course, you’re playing the game because of your love of it, but it’s also important to remember that your opponent is also playing to win and analyzing their moves can help you completely control the way the game plays out. The most important thing to do is practice, and that can make you a champion player in no time. And remember, when you have a bad hand, you can still control how you play and turn it to your favor, so go ahead and do a rummy download today with RummyCircle so that you can start winning!