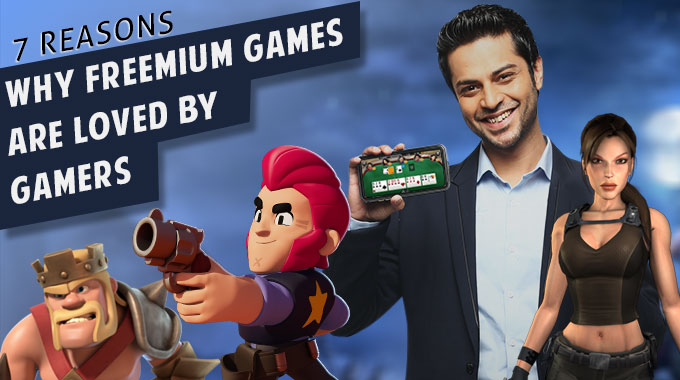 7 Reasons Why Freemium Games Are Loved By Gamers

Gaming enthusiasts face interruptions on gaming platforms while playing. This can be a major dampener. Often, you are not allowed to move to higher levels or unlock certain features of the game without subscribing to a premium version. This not just saps a gamer’s enthusiasm. However, there is a way out – playing freemium games.

What Is The Freemium Model Of Games?

Freemium games are also known as free-to-play apps. These are free to download and play. The main difference between these games and those that need users to pay is that these apps use in-app purchases to earn revenue. They don’t charge a flat fee, unlike the premium game platforms. These are mostly ad-supported gaming apps. Yet, not all of them bombard users with advertisements. While some of these apps disable ads in exchange for in-app purchases, others follow a complicated revenue system that includes in-app purchases.

The Popularity Of Freemium Games

Many games have switched over to a freemium model from the premium models. What makes this model so popular among gamers? There are several reasons.

The best part of the freemium version of games is that they let gamers enjoy the complete game without charging a penny. Gamers can enjoy uninterrupted gaming sessions. They can even do away with advertisements if they make in-app purchases. Gamers pay for cosmetic changes in the gaming arena bit by bit.  This does not hurt their pockets as much as the premium games.

These models allow cosmetic changes in the playing arena. Temple Run, one of the most popular ‘endless runner’ games, illustrates this idea quite well. The game allows gamers to purchase add-ons and make cosmetic changes in the game. The changes are reflected if gamers acquire certain enhancements. What is unique about this model is that you can unlock all the features without spending anything.

Unlike other games, freemium games allow gamers to get a feel of the game before committing themselves to continue to play the game and spend for cosmetic changes or power enhancements. In games like rummy, players can hone their skills in free games before committing to become professionals and play more skilled rummy games.

With the help of these apps, it is possible to add new content to games. This also makes games more enjoyable. For example, in freemium Multiplayer Online Battle Games, you can play the core game for free and purchase different characters to enhance your gaming experience. This can be purchased through in-app currencies that the gamer can acquire or procure through in-app purchases. It is free to try, but if you want to get the ultimate experience, you need to make some purchases within the app. Moreover, such purchases can lead to expansions in the format of the game in the form of adventures, new maps etc.

Some freemium games offer an advantage to players who make in-app purchases. A gamer who makes in-app purchases may become more powerful than another who does not. Although this is disadvantageous for some, it helps for those willing to pay up to win a game. This is not possible in a premium version since, in such platforms, every gamer has access to the same features.

Since freemium games offer the games for free, it will get more players than a game for which you have to pay. If the game is really good, it can become popular through word-of-mouth reviews, and that can incentivise more people to try the game and even upgrade their gaming experience by paying. However, in a paid game, it might be difficult to get new users (unless it’s from a popular company or is a sequel to a popular game).

With the thousands of freemium games available on the market today, the way to a consumer’s heart is through constant innovation. Most mobile developers will, therefore, be eager to differentiate themselves from the market by offering more customised games. Moreover, in paid games, there is little incentive to offer too many updates once a gamer has bought it. However, in freemium games, there is always an element of innovation in terms of gameplay or skins. Of course, it is beneficial to the makers of the game, but it also enhances the gamer’s experience.