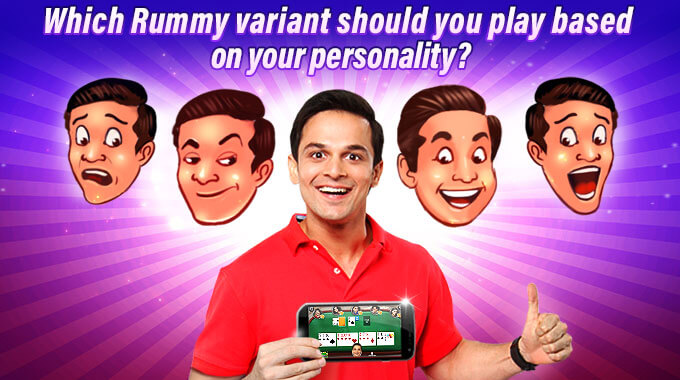 “The first thing you have to know is yourself. A man who knows himself can step outside himself and watch his own reactions like an observer.”

That was a quote by George Goodman in his book The Money game. How true is that quote! To achieve something worthwhile, it is necessary that one knows elaborately about his own self.  Those who are well versed about their own personality will never face defeat in their life. The same theory holds good for online Rummy players too.  This game has many variants, prominent among them are Pools Rummy, Points Rummy and Deals Rummy. A Rummy aspirant should analyze the variants and decide which is best suited for him to play by assessing his own personality. Let us see how to choose a variant that matches your personality.

If you are a multi-tasking personality who does not believe in sticking in doing one task for long, then points Rummy is just the one you should learn to play. You will surely enjoy playing it as this is the shortest form of online Rummy that lasts only for a single deal. You can finish a board and quickly go for the next one and carry on till you are done with it. Again, if you are a workaholic and cannot sit idle even for half an hour, then again you can play this express version of online Rummy. But if you are someone who looks for excitement and thrill, then you can switch to other versions of Rummy as the said attributes are found comparatively lesser in this form of the 13-card rummy game.

A Deals Rummy, unlike Points Rummy, is played for a fixed number of deals.  So, it is relatively a lengthier form of Rummy. Each deal is crucial for you to win. A winner is decided by the number of chips one has at the end of the fixed deals. These chips are obtained by you from the losers of each deals. If you are a loser your opponent gains your chips. Altogether it is a sort of cat and mouse game capable of providing a spine-chilling entertainment. If you are adventurous and love thrills, then Deals Rummy is the right choice for you. Although the risk factor is more, the excitement binds you to play this Rummy variant. You can succeed only in those games where your interest lies in. So, if you feel you can do better in such situations, then why not give a try playing it.

Are you someone who love grinding it on and on non-stop while you play Rummy online? Are you someone who is vested with abundant patience? If you have such virtues which helps you to endure excitement for long, then Pool Rummy is just and equitable for you to play. This Rummy just does not complete quickly. Before knowing why it is lengthy, it is important to understand the game. There are two sub versions in this form of Rummy biz. 101 pool Rummy and 201 Pool Rummy. They are named so to indicate the points beyond which a player’s points should not go. What if their points touch beyond 101 and 201 in the said Rummy games? Well, they stand eliminated. So, the game goes on and on until each player is eliminated, and the winner gets zero points. People who cannot take much pressure and instead can play a long game steadily even with extra time for making moves, then they can play this form of Rummy.  Yes, they must find adequate time too for playing this version.

Although Rummy is a fun game, you cannot enjoy playing it unless it contains the attributes that you love to see in it. So, you should basically analyze the versions carefully and  try those that suits you. It is only then you can play rummy online for real money and be good at it!