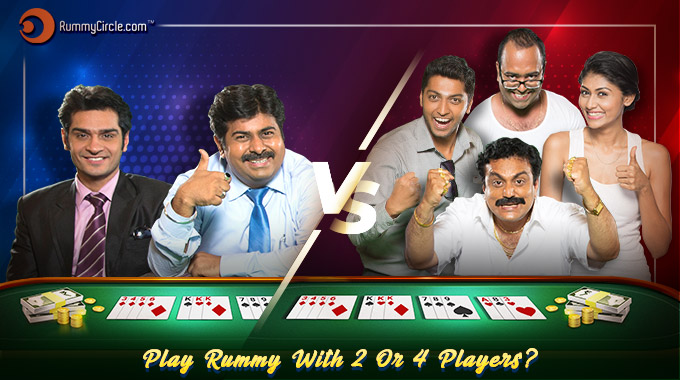 What Is Better, To Play Rummy With 2 Or 4 Players?

There are various versions of the game, but on this platform, you play Indian rummy. It has been played traditionally for centuries. In this type of rummy, there are two to six players who play with two decks of cards. Sometimes the rules are flexible offline when you play with friends and family, but with online rummy there is a set number of players.

You may have noticed that there are differences when it comes to playing the card game with two, four, or six players. These differences enhance the game to varying levels. So, let us jump straight into how the number of players in rummy affects the excitement of the game.

Take a large slice of the winnings

In the online version of the game, you can win real cash rewards by playing casually. During tournaments, the prize amount can go up to lakhs and crores. Don’t you want to walk home with the winning amount?

Feel the speed of the game

When we play a friendly game of rummy with the family, it is slow. In the online sphere, the game is fast paced. Cards are picked and discarded quickly. The pace of the game is one of the aspects that makes digital rummy a thrilling and exciting game.

However, the level of thrill varies in the online game. If you are playing with six people, then you have time to think about your strategy. With time on your side, you have the luxury to coolly think which cards are useless and vital to form a winning hand.

If there are two players in the game, then the pace is super quick. Your mind is alert, and you have to make quick decisions to win the game. It is absolutely exhilarating and perfect for advanced players.

Kick up the excitement with more than one game

The beauty of online gaming is that it keeps evolving. New features are added to spike the game. In this online game, you can play multiple tables at a time. Yes, it is possible! It is super entertaining way enjoy the digital version of rummy. To experience the best visual interface, exciting features and tournaments, download RummyCircle and play rummy on an app or web – the choice is yours!

Feel the thrill of the game

They say, more the merrier, however, if you truly want to experience the excitement of the game then join a table for two players. Fewer people at the table will ensure you are in the heat of things. It is super intense, when you are trying to combine cards quickly. Your brain is active, your mind is making snappy decisions, your competitiveness is high, and you are rolling in thrill. However, if you are playing with six people at the table, then this level of competition is low. If you want to feel the rush of the game, participate with fewer players.

It boils down to the level of expertise

We have gone through various points. Each point works in favour of a duo or group. In this point, let us look at the level of expertise of a player. If you are amateur at playing rummy of your phone, then opt for a table with more players. It gives you an opportunity to sharpen your skills hands on. If you win a casual game, it is possible to win a bigger pool. If you are a pro at rummy, then join a table for two players. The competition is intense and pushes you to improve your mental abilities.

Playing rummy on the mobile is the best way to have an entertaining time. What adds to the enjoyment is the number of players at the table. Fewer players, better the competition. More players, bigger the rewards.