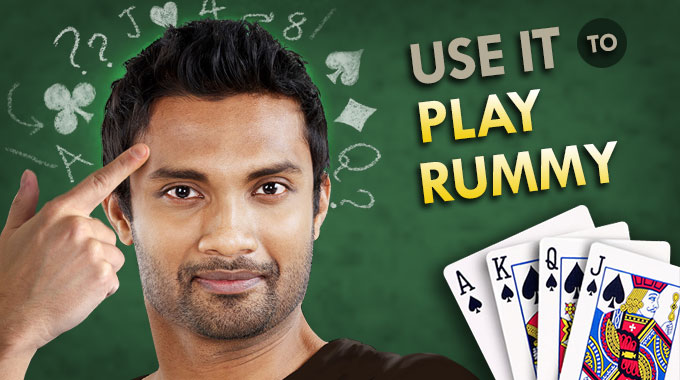 Smart Moves Your Mind Is Making When Playing Rummy

Rummy, a skill-based game, involves specific rules and is played based on strategies devised by the players as the game unfolds. The essence of Rummy is captured perfectly in the famous quote, ‘It is not about the cards you are dealt, but how you play your hand’. Valid in every stage of the game, if you have the skill and expertise to overshadow your opponent, winning is a breezy affair.

In real cash games, what separates a novice from an expert is the decision-making skills. Here are some smart cognitive moves made by experts that lesser experienced players may not necessarily know or be able to execute:

An avid rummy player knows the power of keeping a focused mind during the game, which is an interpersonal skill that can be mastered only with time. Beginners often lose patience or get excited when they have a good hand, but an experienced, seasoned player knows better than that. They wait and observe the moves of their opponents before creating a strategic plan of action. ‘Patience’ is a key virtue that professional players employ when they play rummy online, especially during cash tournaments.

Someone who has just started playing the game may lack the experience of knowing what can be done with high-value cards. According to a common notion, Rummy players are advised to get rid of these cards early in the game. But expert Rummy players know that high cards should be given a higher value. Discarding these cards at the beginning of the game can be a wrong move if there is an opportunity to make a set, and most beginners are guilty of doing precisely that. During the game, a seasoned player will hold on to these cards for a reason, they think one step ahead. The probabilities are that their opponent may be relying on this age-old advice and begin to discard high-value cards at the beginning of the game. So, even if they have no intention to aid their opponent, a professional player will use this ‘hoarding’ strategy against a novice, to leverage their own game.

A game that is based on skill cannot be predicted, and while having a fixed winning strategy is great, using it to play against professionals might not always work. Beginners often have a tried and tested approach that they carefully chalk out. Professionals, on the other hand, are always improvising. Their keen observational skills help them watch the game, memory skills help remember their opponents’ moves and analytical skills aid in devising strategies as and when the play changes. So, while a beginner may not anticipate the bait laid out by their opponent, an expert is always prepared. For instance, when stuck waiting for one or two cards during the game, experts will most likely rearrange their cards and use a fresh perspective to form a set, instead of waiting for the desired card to come along.

Bluffing is not a skill often associated with rummy, but that’s what makes this trick rare. Beginners often assume that bluffing does not work in a game of Rummy. But an expert uses this trick to create an illusion of a good hand. A good player never underestimates the skills of their opponent and uses it against them. A seasonal tournament expert sometimes discards their low-value cards to throw the opponent off their game. While some beginners familiar with this move may use it, seasoned players know when, how, and against whom to use it.

One of the most important differences between the Rummy playing abilities of a beginner and a professional is the keen art of observation. A novice focuses on their own cards, but a skilled player focuses on their opponent’s moves as well. It is a brilliant way to play the game and is particularly popular during cash tournaments that involve high stakes. This helps the player construe the cards their opponent is holding. Learning and observing how other players at the table are playing their game offers most experienced players a winning edge. As a beginner, you can start practising this strategy by playing rummy online without cash and then use it in a tournament to ace the skill.

Using prototypical Rummy strategies in all your games is futile because even a beginner does their homework. Some common moves known to all should be unlearned with time or used sparingly. Expert players who indulge in regular tournaments have, with experience, learned to discard usual moves and replace them with lesser known ones. Having the composure to make a wise decision in a sticky game is what sets professionals apart.

Lastly, just like every day is not a Sunday, not every hand will be a good one. Actually, it might not even be doable, so a smart Rummy player will always use their discretion to drop the game. But a beginner might just go on to play a few hands and might ultimately lose the game. Knowing when to drop your cards is not failing to finish, but is intelligent so as not to lose the game unnecessarily, especially when playing rummy games with cash.

If, as a beginner, you are already making these moves, you are on the right track. If you are not, a Rummy game download or a Rummy website can make it possible for you to practice these skills until you turn into a pro player. Pick up a few extra moves from the seasoned sharks and you will be ready for a cash tournament too.