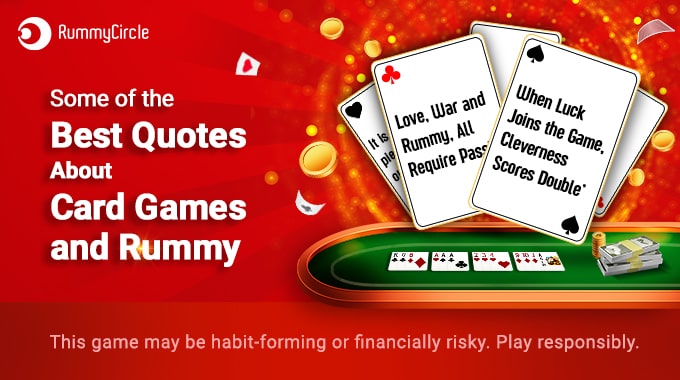 Some Of The Best Quotes About Card Games And Rummy

Playing card games give you a variety of experiences and rummy is a game that provides a gamut of these. Over the years many quotes and references are shared by some of the famous personalities who enjoyed the game of Rummy. All of these are great sources of motivation to enjoy and excel in the card game of Indian Rummy. Reading quotations about something you like is always entertaining and perhaps these sayings can further motivate you to engage yourself fully in the game.

Here are some of the best quotes about this thrilling game of rummy:

“It is a great piece of skill to know how to guide your odds even while waiting for it.”

“Life is like a game of cards. The hand that is dealt you represents determinism; the way you play it is free will.”

“So simple is the basic game of Rummy that the best way to learn it is to just play it.”

“If you were to put together a ‘Greatest Hits’ list for card games, you’d have to put Rummy at the top of the list. Probably more people have played Rummy than any other card game.”

“A beginner with any native common sense can play passable Rummy.”

“Life consists not in holding good cards but in playing those you hold well.”

“If you play your cards right things are going to happen in the long run. In the short run, it is anybody’s guess.”

“Life is not a matter of holding good cards, but sometimes, playing a poor hand well.”

“I must complain the cards are ill shuffled, till I have a good hand.”

“Each player must accept the cards life deals him or her: but once they are in hand, he or she alone must decide how to play the cards in order to win the game.”

“When the cards are dealt, I just want to destroy people.”

“One should always play fair when one has the winning cards.”

“Has fortune dealt you some bad cards? Then let wisdom make you a good gamester.”

“God deals us all different hands. How we play ’em is up to us.”

Our lives are somehow also inspired by rummy! The ability to apply lessons from one’s own life is unique to great minds. You may have found inspiration from these quotes, not only in rummy but in your life as well. Rummy is a great game to play for learning and inspiration as well as for enjoyment. So join a table today and start enjoying this amazing game on our platform or app.