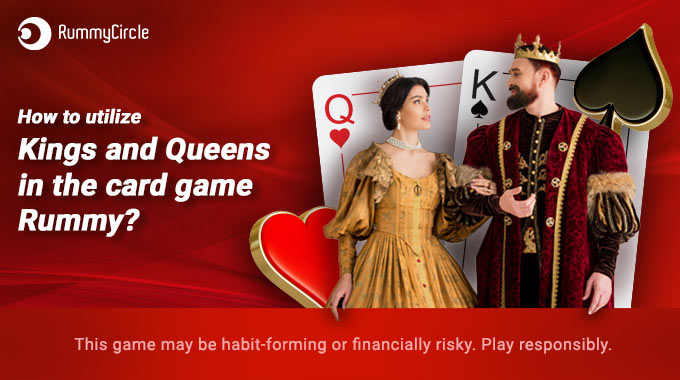 How To Utilize Kings And Queens In The Card Game Rummy?

The game of rummy involves discarding cards one at a time in order to create sets and sequences. You must create at least two sequences, one of which must be a pure sequence, and the others may be any combination of hybrid sets or sequences, in order to win the game. Rummy is a game where winning is entirely dependent on skill rather than fortune. Even though the game’s principles are straightforward, mastering the rummy card game takes a lot of practice.

Every card game has a possibility of having a different purpose for each card. This is particularly valid for cards with faces, such as the jack, queen, and king cards. Understanding the location and purpose of each card in the rummy game is a vital skill that every good player must acquire through time. In order to do this as a rummy player, you should always read as often as you can. Understanding the characteristics and applications of the King and Queen cards is very essential.

Importance of the King & Queen Cards

The face cards in a standard deck of cards are the King, the Queen, and the Jack. In the majority of decks, the King card has the highest rank. It is often shown by a man ruler in a picture. In the fifteenth century, naming the King’s cards after French kings were customary. Titles like Caesar, Charles, Alexandre, and David were bestowed upon them. In place of the earlier sitting King, the Spaniards adopted the standing King. In terms of prominence, the Queen card comes after the King card. A female sovereign sets it apart. Depending on where you are, the card may also have a few minor variations. For instance, each queen in the Persian deck is named after a figure from mythology or the Bible. A queen may also be referred to as a dame in the European setting since the terms king and queen sound similar to the ear.

How to beneficially use the king and queen cards during a rummy game?

Prioritize combining the face cards as soon as the cards are dealt. The primary goal of melding face cards at the start of the round is to lower your overall score total. In rummy, each face card is valued at 10 points, and declaring first by an opponent raises the penalty points. Don’t be reluctant to toss your face cards if they aren’t being utilized after a round or two.

Try making a pure or impure sequence with your kings and queens if you have a lot of them in your hand. To use the king and queen in a pure sequence, you will either need an ace or a jack. Examples are J-Q-K and Q-K-A. Kings and queens may be coupled with a printed or wild Joker in the event of an impure sequence. Examples are Q-K-8 (where 8 is a wild Joker) and Q-K-PJ (where PJ is the printed Joker). However, using face cards to form only a sequence is not compulsory. You can make a set if you can’t locate the jack or ace needed to finish the sequence. But if you have over two kings or queens in your hand, it is feasible.

When you do not immediately get the appropriate cards to use to form a sequence or set, holding onto kings and queens is pointless. It’s quite dangerous to hold off until the very end of the game. You should move fast if you believe there is no likelihood of merging these cards. You need to throw them away and concentrate on other cards.

Isn’t it time to try out some magic with these face cards now that you know how to utilize them efficiently? Implement these methods by playing on our platform. We provide you with the finest bonuses, rapid withdrawals via safe methods, and a sizable player pool available round-the-clock. For access to all the game action from anywhere, you can also download our Rummy app. Come play with us and start enjoying yourself!