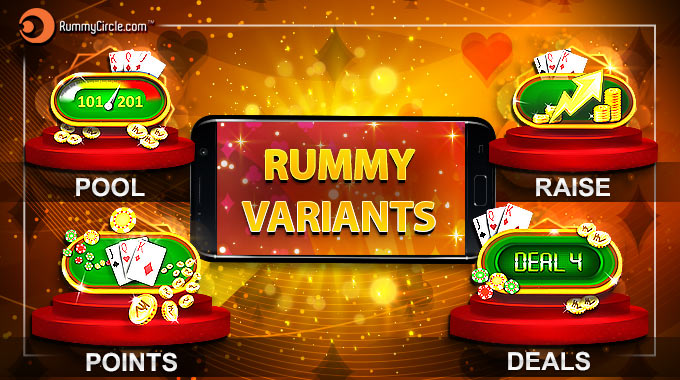 Mastering the rummy skills is one part of the game, now find out which rummy variant is apt for you. On this platform, there are three amazing and exciting variants – Points Rummy, Pool Rummy and Deals Rummy. Each of these variants have its share of thrill, unexpectedness, and strategy. Each variant also appeals to different people at different times. So, delve into each of these variants, understand it’s incredible USP, and who should play which variant.

Points Rummy for quick entertainment: Points rummy is played at a fast pace. The cards are drawn and discarded in quick succession. It offers players short bursts of high-octane action, and the game ends within a few rounds. Points rummy is perfect for those who want to play a quick, exciting game. Someone is looking for brief entertaining time, for instance, during intervals, while travelling for a short distance, or waiting for a friend.

Gameplay: There could be 2 to 6 players at the rummy table. Player one does the first drop. The remaining players continue till player five declares. For example, the score window would look like this considering J as the wildcard joker:

Pool Rummy as a travel companion: It is an exciting game, but the duration depends on which player reaches either 101 or 201 points. Time is abstract, deals are undefined, and fun is guaranteed. If the game is between two players, and one player drops from the game on multiple occasions, then the game will end faster. It does have the element of thrill as the clock runs out of time. However, you have a couple of shots to redeem your total score and stay in the game and win it. Pool rummy is perfect for a relaxing travel experience.

Gameplay: Select the type of game: 101 points pool or 201 as well as number of players. If you pick a game of 101 with two players, you play till some reaches the score 101 and will be eliminated. Player two dropped from the game, so the score kept on increasing. It reached 105 and he was eliminated from the game. Player one won all the games. One of the score window looked like this considering 5 as the wildcard joker

Raise Rummy is electrifying: It is similar to points rummy, but the additional feature is that the point value increases at regular intervals. This variety is exclusively played on RummyCircle. The intensity of the raise rummy game is power packed and electrifying. It is perfect for those who have a thrilling side and not waivered to raise the stake.

Deals Rummy is easy going: For a laid-back afternoon or blissful evening, deals rummy is the best way to spend your time. This variant is perfect for those who like skill-based challenges and with time on their hand.

After hitting sort, your cards still do not have viable combinations, then quickly reshuffle them and get rid of high value, unwanted cards. If you lose this deal, you will lose a lot of chips. Strategies to reduce your game score and avoid losing the chips.

Gameplay: When you select deals rummy, you are given a couple of options. For instance, you can choose either Best of 2 deals, 3 deals, or 6 deals. Also, you get to select the number of players at the rummy table – two to six players. For instance, if you pick 2 deals and 2 players, at the end of the game the score window will look something like this, considering A as the wildcard joker:

The score window will look something like this, considering 2 as the wildcard joker:

The winner is clearly player 2, who won both the deals.

Depending on the number of players at the table, the pace of the game changes. If there are just two players, then the game is exciting and thrilling. However, ensure you have a strategy at the beginning and create combinations quickly. As you know, at the end of every deal, the winner will win chips from losing players depending on their score.