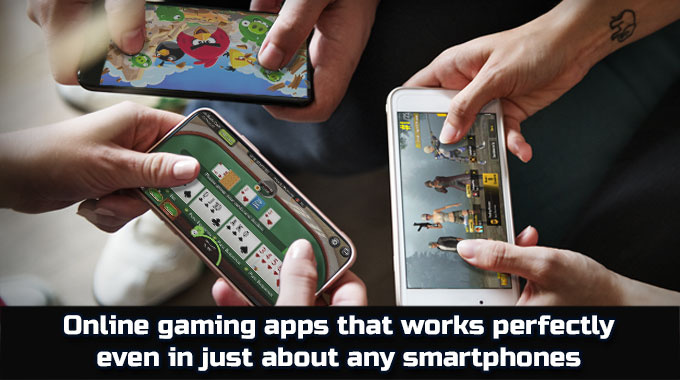 Online Gaming Apps That Work Perfectly On Any Smartphone

There was once a time when high-quality PC games were available only on CDs while some games were developed exclusively for mobile phones. But then came along the phenomenon of online gaming website, where you could get access to games boosting vibrant graphics with smooth connectivity. As the popularity of video and online games grew, developers started taking the most popular games to mobile devices.

However, you can’t play just about any game on your phone. Read on to find out why.

The emergence of online games changed the security requirements for computer games, as cutting-edge development in computer graphics, artificial intelligence, human-computer interaction and programming became the need of the hour; game developers or operators usually do not pay much attention to these security techniques. Often, way too many gaming sessions involve more of dealing with regular app freezes or the tedium of loading time and less of the ‘gaming delirium’. This is because contemporary games are designed to provide a close-to-reality experience and hence require a huge volume of HD graphics, something not all devices can handle.

The pre-installed apps consume a lot of space, often leaving no room in the phone for either installing or running a high-graphics game with ease. These could lead to lags in the game or a greater time for it to load. Moreover, it is not uncommon to find gaming enthusiasts disappointed over lost data in the process of changing their gaming device. On top of that, there could be no greater interruption to an exciting gaming session than a slow internet connection- and we all can relate to that!

Candy Crush Saga is one game that everyone has heard of, even if they haven’t tried it out yet. After all, its audience is enormous. The app reportedly brings in a whopping $600,000 to its developers every single day! The game owes its popularity to its ability to be both fun and challenging at the same time. However, there are many games that have a very similar concept to Candy Crush, and they can all be accessed with a quick download without taking up too much of your storage space.

Toy Blast, with its interactive puzzles, adorable graphics and cute themes is also one of the many popular online gaming apps. The game’s easy-to-grasp features and the much-needed boost that it gives to one’s brain are the reasons for its popularity. As the name suggests, it can be a real blast playing the game too.

The chief reason behind Angry Birds’ popularity lies in its visual design, background music (which offers an emotional appeal), and gameplay mechanics such as time and progress-based rewards. But this game has lately started losing its popularity due to changes that resulted in bad graphics and gaming complexities as stated by many users. There are others who suggest that sequels, namely DLC Prequels had a lot to do with the game’s decline in popularity. Nevertheless, if you are looking for some mindless fun, this is the game to go for!

A variety of Rummy games are played in different parts of the world- when it comes to India, the 13 cards classical Indian Rummy is by far the most popular form of the game. The game is not only played in real life but is also becoming an immensely popular online gaming option in the country.

RummyCircle offers 13 cards in the online game of Rummy app and web-based version, and is played by thousands of players every day. The players also have the option to participate in Rummy tournaments and win cash prizes- doubling up on the thrill the game has to offer. RummyCircle has made Rummy very popular among the masses. It certainly is changing the definition of the traditional game of Rummy by becoming the most played card game in India.

This game has become quite the rage among the youth. It is a great game that also tends to improve your reflexes in real life. Though PUBG cannot be called one-of-a-kind as there have been many similar games before, the main reason for its popularity has been the way it has been presented to the audience. However, the game is gradually being criticised on the grounds of Stream Sniping. Its servers crashing (due to crossing the 1 million user limit) has also contributed to its recent decline.

Every online game goes through its unique highs and lows. Regardless of this, online gaming has come a long way from its traditional PC console versions. While they were failing to retain the masses, the current smartphone-friendly app versions are much more easily accessible and leads to a greater number of users.