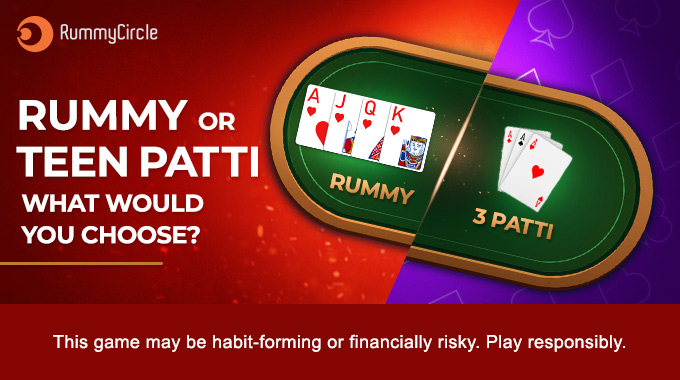 What Would You Choose – Rummy or Teen Patti

Playing Rummy late into the night during festivities with much hilarity and fun is a nostalgic memory for most Indians. Rummy is quite a popular card game in India, but not the only one. A close competitor is teen Patti, which is associated with Diwali in most Indians’ minds. Other popular card games that Indians played in the long summer afternoons when there was no internet or smartphones are, Satte pe Satta, court piece and bluff. These games are more popular offline, but rummy and teen Patti have become popular online games, with millions logging into the gaming apps that offer these games.

Teen Patti and online Rummy games enable players to enjoy themselves at their convenience at any time. They can pit their skill against different online players, enter tournaments and win awards. These varied challenges offered by the online card platforms add to the excitement of playing online.

Deciding which is the more popular of the two is a little difficult, but before going into any details, let us talk a little bit about both.

Origins of Rummy and Teen Patti

Some attribute the origin of the game to a 19th-century Mexican game called Conquian. It spread to other parts of the world from this region.(Con quién in Spanish means ‘with whom’).

An alternative narrative is that the game originated in China, and the name Conquian is a colloquial version of the Chinese game Khanhoo or Kon Khin.

Teen Patti is very much home-grown(meaning India) though it is pretty similar to the three-card brag game played in the UK.

The Indian Rummy card game is a popular variant with its own further versions such as Points Rummy, Deals Rummy, and Pool Rummy. Rummy is entertaining to play but also requires skills and strategies to win. The rules of Indian Rummy are simple to follow. In the 13 card rummy, two to six players can play. The game’s objective is to meld the cards in sequences and sets. One must have a pure sequence of 4 or more and a set of 3. One cannot use a joker or wild card in pure sets and sequences. The person who finishes first can declare the game.

Points Rummy, pool rummy, or deals Rummy have only slight variations to these rules, but the final objective in all three is melding cards in sets and sequences.

Teen Patti is the simplified version of Poker. As the name suggests, each player is dealt three cards. The game is determined by the strength of the cards you hold in hand. The ranking of cards is from highest to lowest. Aces are termed the strongest. Three aces are a royal flush, similar to Poker.

Players can decide to continue or drop out depending on the cards they have in hand. There is a blind option too. Meaning you cannot see your cards. People who choose this option need to put in only half of the wagers of the other players who opt to see their cards. Players can raise or fold their cards.

Now let us go into the popularity of the two games. Over 55 million Indians play rummy games online. India’s mobile gaming market is worth $1.5 billion and is expected to grow to $5 billion by 2025. Going by the number of people logged in every day to play Rummy online.

The reasons for the popularity of online Rummy are many. It is considered a game of skill and strategy. There are many variants of the game available to play. Several online gaming platforms offer the game, and access is easy. The interface is easy to navigate. There are demo videos and practice games on offer too.

Also, online Rummy has been declared legal by the Supreme Court of India. Hence, people can participate in tournaments and competitions for cash rewards.

Teen Patti, on the other hand, has some restrictions on playing it online. Also, the game, like Poker, has some difficult rules.