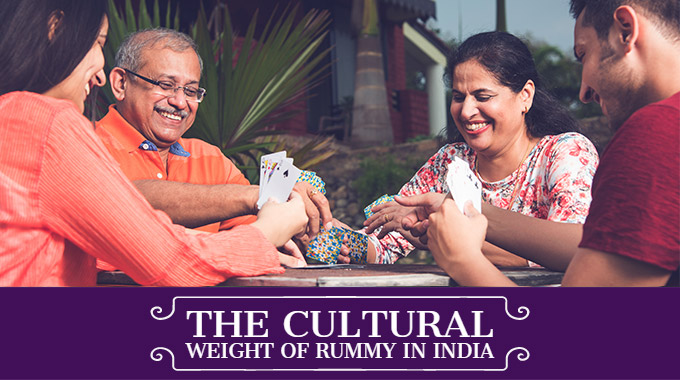 The Cultural Weight Of Rummy In India

India has a long history of board games and is credited with the invention of multiple innovative ones including Snakes and Ladders and Chess. Card games though were introduced only in the 16th century by the Mughals, who were fond of the game Ganjifa. Introduced as a court game, it was played with an extravagant set of cards made of ivory or tortoise shells and decorated with precious gems. The cards were made by local artisans and were heavily influenced by epics like Ramayana and Mahabharata.

Cards made of palm leaves and wood came into circulation much later, and that’s when card games reached the common people. They then quickly rose to become one of the most popular forms of entertainment in the country. Rummy was among some of the popular card games of the time. Rummy had, in fact, become so popular that over time, a regional variant of the game took shape, which is now called Indian rummy.

Who Played The Game?

In its early days, cards were played only by the royals, especially by the female aristocracy. Today, it is commonly played by many Indians during meetups, family gatherings, festivals, and even as a brain exercise.

How The Variants Came To Be

The version of rummy played today is not the same as the one that was played centuries ago. The game spread from one country to another, from the rich to the poor and from one generation to another. Different people from different parts of the world came up with their own versions of rummy. And that is how Indian rummy came into existence. Each region added a different essence to the game, creating multiple variants. Traces of the game that was played during the Mughal times can still be found in local traditions. However, the modern-day Indian rummy has two widely accepted formats – the 13-card game and the 21-card game. However, the former is more popular.

How It Became Popular

Rummy is very easy to learn and fun to play. At the same time, it requires a certain degree of skill to win, which makes it very interesting. You need a deck of cards and a group of people. What made the game popular was that it was played at a time when the sources of entertainment for people were limited. The challenging nature of the game made it an exciting way for the common people to have fun. In the mid-19th century, the game was referenced around the world in various cinematic and popular cultures, and India is no exception.

The Supreme Court of India recognizes the game as one that requires strategy and intellect over luck, which allowed it even more acceptance among the people.

The Advent Of Online Rummy

It is evident that rummy has become an indispensable part of Indian culture. The past decade has seen an exponential increase in the number of rummy players in the country, and this can be attributed to the digital form of the game.

Technology has made it possible for the eradication of obstacles faced playing the physical version of the game like gathering people, looking for a place to play and so on. Online rummy is just like playing with real cards and is played in a rummy app on smartphones or websites on the internet. Thanks to this format, many people are now aware of the fact that rummy is indeed a game that needs deftness.

Unlike the traditional rummy, it doesn’t have any physical or time restrictions. Players can also win real cash by winning tournaments. RummyCircle is one such platform where you can play rummy online. Thousands of players take part in tournaments that are conducted daily and win rewards. These are only a few of the benefits of playing rummy online.

Online rummy has become so popular that people play the game while commuting and during weekend parties. In fact, you can also play rummy while travelling by downloading the RummyCircle App on your smartphone.

Rummy has succeeded in transcending cultural and geographical borders to achieve a universal appeal. For Indians, rummy is a part of a long tradition and there is no doubt that there is a huge scope for it to grow further in the future.