We have been unable to reach you at ( Update) or ( Update). Your daily add cash limit has been reduced to r , until we are able to contact you.

Creation of another account is prohibited and may lead to closure of all accounts and forfeit of all money.

Stay in control, stay entertained!
Contact Us
Change Username
Your username has been changed successfully.
Please use your new username or registered email address to login next time.

Change Username
You have already changed your username once.
You are no longer permitted to do so.

Change Username
Your username has been changed successfully.
Please use your new username or registered email address to login next time.

Change Username
You have already changed your username once.
You are no longer permitted to do so.

Your browser is outdated and not fully supported.
For a better experience on RummyCircle.com, please upgrade your browser.
To continue, please confirm xyz@gmail.com ( Change Email)
If you face trouble confirming, send a blank email from xyz@gmail.com to emailvalidation@rummycircle.com

Enjoy higher deposit limits by just getting your mobile number verified. Enter OTP code sent to your mobile below:

Specify your new number in the field below. An OTP code shall be sent to the number you specify for verification.
Phone Number:   Save ￩ Go back

Get an increased monthly Add Cash Limit.
Enjoy higher monthly Add Cash limits by getting yourself ID verified. All you need to do is to upload a scanned copy or a clear photograph of your ID proof taken with a camera phone.
Upload Documents

To continue to get full access, confirm xyz@gmail.com ( Change Email)
If you face trouble confirming, send a blank email from xyz@gmail.com to emailvalidation@rummycircle.com

Confirmation email has been sent.

You will need to provide your personal details by clicking on this button, before you can play cash games.
You have been assigned another username since the one you requested was unavailable.
Change Username
Your assigned username is
Change Now CLOSE
Practice Chips

Reward Points
1 Reward Point is earned for every 1 Loyalty Point earned.
Step 2/3
Next
Redeem
Earn Rewards
Every Time You Play

In recognition of your true value, your status has been upgraded to VIP (Very Important Player). We appreciate your continued patronage. With a top-notch status like yours, comes a dedicated Relationship Manager for all your needs! Hover your mouse pointer over the icon above to get Relationship Manager details. 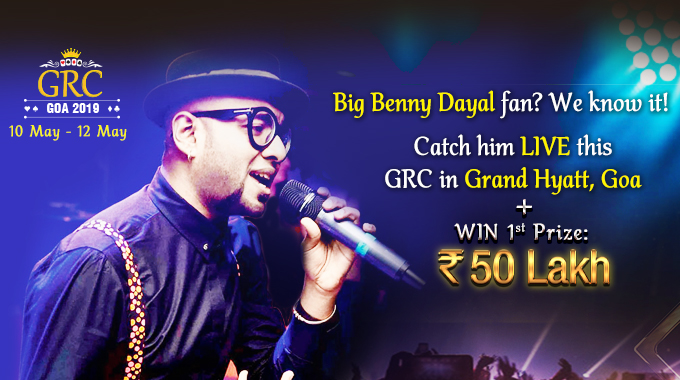 We understand that not all our players could travel all the way to Goa for a 3N stay & play GRC, and so we have introduced GRC Online - a way you can be a part of GRC from home, at your comfort!

How to Play GRC Online?

The top 12 winners of GRC Online Finale will walk into Grand Hyatt, Goa on 12th May & play in the Grand Finale Round 4 directly! Yes, it’s going to be that easy… But, if you’d like to party with the champions, feel free to stay back & enjoy the following:

Note: 12 finalists will be flying to Goa to play the remaining 2 rounds LIVE

Note: The 12 finalists who fly to Goa will compete with the remaining 24 finalists for the 1st prize of r 50 Lakh.

What’s the best part you ask? You play directly with the best Rummy players in India on the FINALE DAY in Grand Hyatt, Goa! It can’t get better than this.