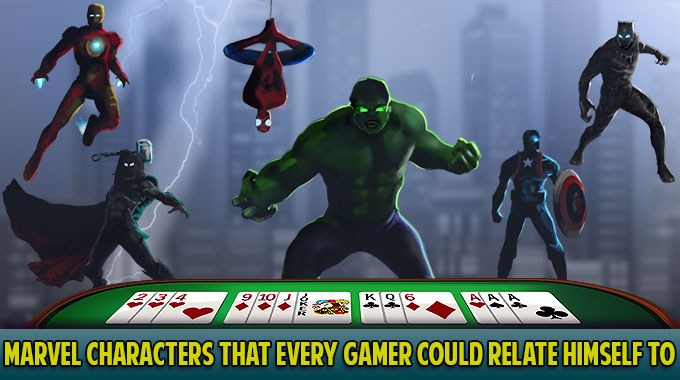 Marvel Characters That Every Gamer Can Relate Themselves To

Gaming is something most of us have either tried or love doing. However, it is not all about fun- they also challenge your skills at every turn. However, two players rarely match in terms of their gameplay. Each player has a different vision, observation, strategy and skill set for the game.

The Hulk has two sides- the raging green monster and the soft-spoken, unassuming scientist. Similarly, players resembling the Hulk could be rational and intellectually driven- but you don’t want to make them angry! In their Hulk persona, these players could go on a rampage within the game, often leaving destruction in their wake. While it might not be the wisest strategy, it might confuse opponents just enough to throw them off-track.

These kinds of players might be difficult to spot, but if you notice someone who started off being completely quiet and is progressively getting more animated or angry, you know you’ve found the Hulk!

The character of Doctor Strange is known for his ability to cast a spell and protect everybody from threats. People resembling Doctor Strange are known to be very calculative. Such players think ahead and plan for the consequences of their move before taking a single step. They are the Masters of Game strategy and execution.

However, when the opportunity arises, such players can cause the most damage. Have you ever seen a player who seems almost too reserved and quiet but then hits you with a move you probably didn’t expect? These are the people who, like Doctor Strange, think of 14 million possibilities before picking the best move to proceed with.

Deadpool is known for some of the most outrageous and superhuman capabilities, such as enhanced reflex and an ability to regrow limbs. He has superhuman agility, stamina and endurance and is known for his cynical sense of humour. All these are great qualities in a gamer- someone who can take hits and bounce back, stronger and with some innovative strategies to leave their opponents dumbfounded.

These players can surprise their opponents with their moves and do so with a grin. If you’ve noticed someone in the rummy-playing community who’s talkative and charming yet manages to leave you scratching your head with the move they’ve just pulled, they probably resemble Deadpool.

He is the quintessential leader in Marvel Comics. Players resembling Captain America have the ability to lead people into the toughest of situations and yet make sure that the team survives, at the end of the day through their strength. Another distinguishing feature of Captain America is his keen sense of differentiating between what’s right and wrong. Similarly, people who resemble the Captain tend to be more ethical, focusing on making themselves better gamers than rely on cheating.

There are people in the Indian Rummy scenario who display the strength of Captain America. Such players can assess the hands of their opponents as well as their moves. Since they can go a notch up and deliver fitting punches, they are mostly unmatched rummy players who win on most occasions.

The Captain also has another role- boosting morale. When all hope seems lost, and the team is on the verge of losing, this person can encourage everyone to give their all to the game. Winning or losing is immaterial to them- they only play for the sake of playing a good game!

Many wondered how Ant-man was going to fit in as an Avenger- he’s neither the strongest nor the smartest. But as anyone who’s watched Avengers: Endgame can tell you, it is his grasp of the quantum realm that ultimately brings everyone back.

Similarly, the Ant-Mans of the gaming world are often overlooked, much to their opponents’ detriment. With their adaptability and quick thinking to fit any situation, they could come up with surprising moves that could baffle their rivals.

Owing to their Ant-Man-like abilities, they are also quick to grasp the moves of other players and make their moves accordingly. Such people could be very difficult to play against since you can rarely know when and how they are going to surprise you.

Just like these varied superheroes band together to form the super-team called the Avengers, different kinds of players coming together to form a team is also important. With varied personalities in a team, it is possible to cover each other’s weakness and formulate a winning strategy that will defeat your opponents!