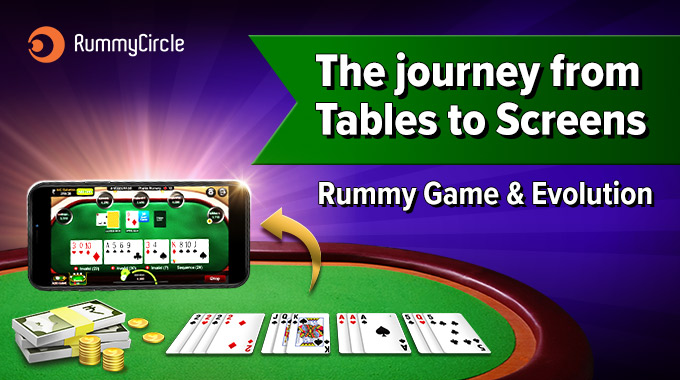 THE JOURNEY FROM TABLES TO SCREENS – RUMMY GAME & EVOLUTION

Okay, while playing rummy, has it ever occurred to you when and how did it all start? No, not just rummy – it’s card games we are talking about. Hearts, spades, clubs, diamonds; these are all instilled in our minds as if they existed since the very outset of mankind – is that true? Or is that what we believe?

Well, you know the origin of card games can be traced back to 1000 AD, but what developments followed later?

AND RUMMY WAS BORN!

A basic search would make you familiar with David Perlett – who, in one of his books mentioned the origin of all forms of Rummy from a Mexican game called ‘Conquian’. With a rich history of 400 years, here are a few facts about Indian rummy –

Indians and the love for Rummy?

Well, Indians have loved entertainment since ages –archaeological findings and sites of ancient civilization are a testimony to it. Among hordes of recreational means, card games have never failed to make a place. From Mughals to the digital version of Rummy, Rummy has been one of the most prominent games in India.  Here’s why –

There’s no denying that card games have always been a vital part of Indian traditions and culture. Rummy is believed to have formed the social fabric of various societies and families. The onslaught of video games couldn’t stop card games from surviving, to say the least: in fact, the introduction of Rummy in the digital arena surged its popularity more than ever.

India has a very impressive culture enriched with a lot of elements – and Rummy being one of them. Just like everything else in the nation, card games have seen an evolution too by getting online in the modern world. With the smartphone’s penetration in tandem with affordable data charges, rummy has become accessible to all and sundry. A perfect balance of skills and entertainment, Rummy is waiting for you to use your brains!